In many regards, we know more about the cosmos than we do about the depths of the Earth’s oceans. The animals who inhabit this mysterious realm are in a constant struggle to find food and avoid becoming food themselves. Like all animals, only the fittest survive to pass on their genes to the next generation. However, there is one animal who has the power and technology to break all the rules of nature- humans. We are in a truly unique position, as we have the ability to either enhance diversity for future generations to appreciate, or compromise it for our short term gain and indulgence. When you begin to see these magnificent animals as beings unto themselves, it becomes obvious that they have inherent value, regardless of their value to humans.

The world’s oceans are thoroughly dominated by invertebrates- animals who do not have a true spinal chord. Invertebrates represent over 95% of all animal species on Earth. [1] Crustaceans are among the most highly specialized invertebrates. Their jointed bodies allow for free range of motion, despite the fact that they have a rigid exoskeleton. In order to grow, crustaceans must continually shed their armour. In the days after molting, their “skin” is extremely soft and flexible, which allows for rapid growth. During this period, they are also highly vulnerable to predation and spend much of their time in hiding. This molting process dominates the vast majority of a crustacean’s life as they recover from the previous molt and prepare for the next. 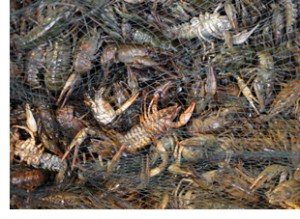 Lobsters, crabs and shrimps range in color from transparent to vivid reds and blues. Like most other animals, color is an important part of their world. Whether they are courting a potential mate, camouflaging themselves from predators or sending a message of aggression, color display is critical. [2] Some crabs such as the Hermit, seek out objects like shells to aid in camouflage. This allows them to simultaneously hide from predators and stealthily stalk their prey.

Molluscs are also invertebrates, with a fossil record dating back over 550 million years. Their marine habitat is extensive- ranging from the shallow inter-tidal zone to the pitch-black ocean floor. Molluscs have evolved many strategies for ensuring their survival. Octopus and squid use jet propulsion to dart through the water at speeds up to 20 mph. Scallops, clams and oysters encase their fragile bodies in a durable shell.

While intelligence is an irrelevant factor in valuing an animal’s life, it is interesting to note that octopus and squid have a very large brain to body size ratio. As such, they have exceptional senses of sight, smell and touch. Together, these senses make them an unparalleled marine hunter. Although they have few predators to fear themselves, those who do pursue them are often faster and more agile. To avoid becoming a meal themselves, octopus and squid deploy a dense cloud of black ink from a pressurized sac. The ink confuses the predator long enough for the squid or octopus to make their speedy escape.

Despite the fact that scallops, clams and oysters lack a true head, they are very responsive to their environment. Scallops use their eyes to spot potential predators, while clams actively seek habitats that are rich in oxygen and food particles. Like the crustaceans, many species of molluscs are hermaphroditic. This means they are able to change from one sex to another when it is beneficial to do so. There is no greater way to ensure that your species will flourish.

Both crustaceans and molluscs are extracted from the world’s oceans on a staggering scale. Measured in metric tonnes rather than individuals, no one really knows how many of these animals are killed for human food each day or each year. What we do know is that their populations are in constant flux. They are targeted directly in the form of mass hunts, as well as indirectly as by-catch from the fishing industry. In many cases, the marine animals who depend on these invertebrates as their main source of food are severely affected. In a relatively short period of time, they can be left with little or no food of their own. For animals who have evolved for millions of years to specialize in hunting particular prey, their alternatives are few. The compounding effect of this human disruption is still to be determined. Although we do not understand the full repercussions of our actions, we continue to decimate these populations and claim to be doing it at a “sustainable” rate. In reality, there is no way to employ a sustainable practice if you do not understand the intricacies of the ecosystem you are targeting.

The scientific discussions on pain perception in invertebrates are complicated and often contradictory. The indisputable facts are that most invertebrates do have complex nervous systems and exhibit many traditional behaviors associated with avoiding pain and fear.

After being removed from the water, they may spend hours or days on the deck of a ship. Surrounded by unfamiliar sights, smells and feelings, they are stacked, piled and thrown with no regard for their well-being. Once on land, they either suffer slow deaths as they are packed into ice, or they are delivered to stores and restaurants to be killed on site. There is no “humane” method for killing any animal, and these invertebrates are no exception. For lobsters and crabs, the most common methods of killing include decapitation, live dismemberment and boiling alive.

Whether you are ordering food in a restaurant or shopping in a grocery store, please remember that animals have an interest in avoiding pain and suffering and those interests have been disregarded for a human preference. In the oceans, they live in harmony with their obligate predators and prey. But a human population that is out of control cannot be sustained on their flesh. If we are to truly live within our means on this Earth, we must radically alter our role in the food chain by adopting a vegan lifestyle.

“The animal shall not be measured by man. In a world older and more complete than ours, they move finished and complete, gifted with extension of the senses we have lost or never attained, living by voices we shall never hear. They are not brethren; they are not underlings; they are other nations, caught with ourselves in the net of life and time, fellow prisoners of the splendor and travail of the earth.” [3] – Henry Beston