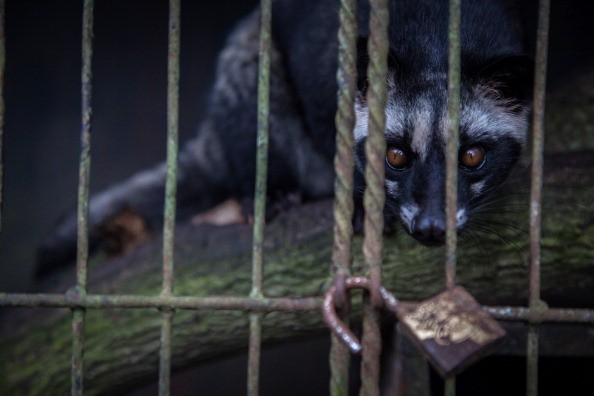 TAMPAKSIRING, BALI - MAY 27: A civet cat looks out from a cage inside a 'Kopi Luwak' or Civet coffee farm and cafe on May 27, 2013 in Tampaksiring, Bali, Indonesia. World Society for the Protection of Animals (WSPA) commissioned research showing the true cost of the world's most expensive coffee, thousands of civets are being poached from the wild, kept in inhumane, conditions, and farmed to meet the growing global demand for civet coffee.
(Photo : Nicky Loh/Getty Images for World Animal Protection)

In the business of producing the world's most expensive coffee, animal cruelty has been a normal everyday thing. Kopi Luwak, which is made from the poop of civets, has gained popularity over the years due to the bizarre nature of the drink. However, little known is the cruelty that these animals endure just to produce a cup of joe.

According to a recent study from the Universities Federation for Animal Welfare and Oxford University’s Wildlife Conservation Research Unit, civets that are in the wild are now held captive and caged in worse conditions. The research observed 48 caged civets at 16 coffee plantations in Bali that cater to tourists. The plantations scored between 0-4 in eight husbandry factors including hygiene, shelter, mobility, noise, surfaces, food, water and social interactions.

Civet coffee or Kopi Luwak is normally produced by collecting partially digested coffee beans from civets roaming in the wild. However, with the growing demand and popularity of the world's most expensive coffee, more extreme measures have to be taken to cope up with the demand.

The civets in the said plantations are also very frail as they are being fed with a diet of only coffee cherries while some are overweight because of immobility in tight cages.

Researcher Neil D'Cruze told National Geographic, “Some of these cages were literally the tiniest -- we would call them rabbit hutches. They’re absolutely soaked through with urine and droppings all over the place."

However, D'cruze revealed that what's most disturbing is the wire mesh cage, which is "a constant, intense source of pain and discomfort" and could wound the animals.

People for Ethical Treatment of Animals (PETA) Asia also investigated some of the civet coffee farms in Indonesia and the Philippines, and revealed footages of sick, depressed civets. Some are even exhibiting symptoms of zoochosis, a neurotic condition among stressed animals in captivity. The signs include constant spinning, pacing and bobbing their heads.

PETA says that the Kopi Luwak products, which are typically tagged as "wild-sourced," is a form of false advertisement. Farmers from the plantation revealed to the PETA investigator that it is impossible to produce wild-sourced Kopi Luwak, and they have no problem mislabelling their products.

© 2018 NatureWorldNews.com All rights reserved. Do not reproduce without permission.

Green eCommerce: Tips For How to Make Your Business Eco-Friendly

Has a Parallel Universe Really Been Detected? The Jury Is Still Out

5 Essential Smart Home Technologies You Should Consider Having

Green eCommerce: Tips For How to Make Your Business Eco-Friendly

You have already subscribed. Thank you.

The Power of Oxytocin: Effects on Mental and Emotional Health

The Story Behind How Coronavirus Slashed Carbon Emissions

Mississippi Delta Marshes May Soon Be Gone Due to Climate Change