What a Difference a Fish Makes 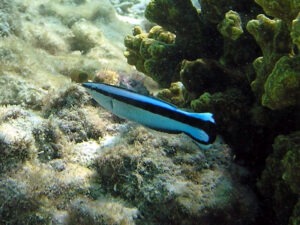 Imagine taking a test and every time you pass, they change the rules to ensure you fail.

Through the years, scientists have made non-human animals go through a variety of tests* to determine their intelligence (of course, who are we to judge their intelligence?), their memory, and whether or not they are self-aware—that is, their ability to recognize themselves as individuals, a test often performed with a mirror.

Some of these studies have been instrumental in “proving” intelligence for non-human animals who are similar to us (like primates) and “charismatic” (such as dolphins and elephants). Their intelligence and even their ability to grieve seem to be fairly common knowledge.
Unfortunately, this is not the case when it comes to people understanding that these same traits are exemplified in those animals some people eat – such as pigs, who are said to be smarter than dogs, and sheep, who can recognize human faces.

However, what happens when a little blue-and black-fish passes the test to prove that they too are self-aware?

According to Quanta Magazine: https://www.quantamagazine.org/a-self-aware-fish-raises-doubts-about-a-cognitive-test-20181212/

A little blue-and-black fish swims up to a mirror. It maneuvers its body vertically to reflect its belly, along with a brown mark that researchers have placed on its throat. The fish then pivots and dives to strike its throat against the sandy bottom of its tank with a glancing blow. Then it returns to the mirror.

And then there’s this from the same article:

Jordan’s findings have consequently inspired strong feelings in the field. “There are researchers who, it seems, do not want fish to be included in this secret club,” he said. “Because then that means that the are not so special anymore.”
If a fish passes the mirror test, Jordan said, “either you have to accept that the fish is self-aware, or you have to accept that maybe this test is not testing for that.” The correct explanation may be a little of both. Some animals’ mental skills may be more impressive than we imagined, while the mirror test may say less than we thought. Moving forward in our understanding of animal minds might mean shattering old ideas about the mirror test and designing new experiments that consider each species’ unique perspective on the world.
There are a couple of things I want to unpack here. First, I am not so sure that the researchers in question are only concerned that primates aren’t so special anymore – I believe that any acceptance of fishes being self-aware could make many people not want to eat them anymore. Accepting fishes are aware of what is going on around them means we must accept they are feeling the pain of a hook, the frustration of being caught in a net, and the suffocation of being pulled into the air.

Second, why is there sudden concern that there is something wrong with the test? Why can’t this little fish prove what many of us have been saying all along (without needing to do testing): these are feeling, sentient beings who deserve our protection?

I am beside myself these days with fear about what we are doing to our planet, our ocean specifically, and how much we are impacting those who live beneath the waves.

Understandably, people who love sea creatures like whales, sea turtles, and dolphins are heartbroken when they see the frequent regular reports of these animals caught in nets and hooks. One way to protect them is to not contribute to the demand that requires those nets and the hooks – don’t eat sea creatures. If not for the fishes, lobsters, crabs, shrimps, and other animals, then for the lives of the larger animals who will be trapped.

We are all connected, and to me that means we have a responsibility to protect one another from harm.

When I think of all of the colors, life, and unbelievable beauty living in the ocean, my heart feels so full of love and wonder.

We can all watch videos of whales and dolphins playing in the ocean and smile lovingly at otters and sea lions, but unless we stop consuming those who live there and stop polluting their world, we stand to lose all of them.

And when we decorate our homes with images of the ocean, it will end up just being a part of a world we destroyed.

Everything is connected, and we need to fight for the ocean** now.

*I am opposed to all animal testing, but that is not the reason for this blog.

** I say “ocean” as singular here, as I feel to recognize different oceans is arbitrary, because they are all one and the same. The animals don’t see boundaries when they swim from one ocean to another. It is one large body of water, and we need to protect all of it.