In nature, turkeys have long been admired for their striking beauty and alluring disposition. Driven by an unyielding sense of curiosity, they roam their native woodlands and grasslands in search of food, shelter and mates. Early in our country’s history, Benjamin Franklin lobbied for the native wild turkey to be our nation’s national bird-calling them a “respectable bird” and “a bird of courage.” Many naturalists echoed Franklin’s sentiment. 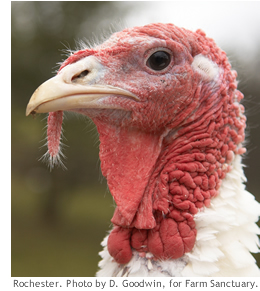 Red, copper and green feathers shimmer amongst the surrounding black feathers, while their expressive eyes give an insight to how they perceive their surroundings. Aside from their magnificent beauty, turkeys are highly social birds. One of their most social activities is foraging for food. It is not uncommon to see multiple families foraging together as they search for acorns, fruits and seeds. Over a period of months, parents teach their offspring where to find food and how to elude predators. Although they prefer the protection of isolated woodlands, families commonly wander for miles to find the food they require. At night, the families roost in the trees free from the threat of ground predators.

One of the turkey’s most notorious attributes is their intricate and elaborate mating ritual. It is a memorable event for anyone who appreciates the eccentricities of nature. The courting begins with the male puffing up his chest and tail feathers to make himself look as big as possible. Above his beak, his colorful snood becomes more pronounced and air sacs in his neck slowly inflate and deflate causing a low-pitched vocalization. Once he has the female’s attention, he slowly turns in circles, raises and lowers his legs, and occasionally vibrates his wings to display vibrant feathers reserved specially for this occasion. The entire session can last for hours.

In industrial animal factories, turkeys know nothing of a natural life. The goal of industrial farming is to manipulate an animal’s nature to make them grow as fast as possible with the least expense. For turkeys, this flawed equation involves intense confinement, genetic engineering and a series of painful mutilations. Turkeys raised for “meat” bear little resemblance to their wild ancestors. The industry has no regard for the animals’ instincts or general well being-they are treated strictly as a commodity. 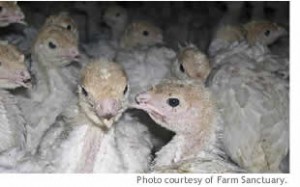 The process begins in the breeding facilities. Males and females are kept in crowded sheds where workers manually extract semen from the males and artificially inseminate the females. These are some of the most miserable birds, as they must endure this crude practice repeatedly over a period of years. When their breeding capabilities decline, their exhausted bodies end up in a variety of low-quality processed foods.

The young hatchlings are transported to larger facilities where they live the remaining portion of their brief lives. With thousands of individuals crammed into a single shed, they struggle to move past each other as they walk through an ever-increasing layer of excrement. Over time, their feet and breasts become ulcerated from the uric acid. The intense smell of ammonia combined with the sound of thousands of birds calling out simultaneously creates an extremely stressful environment.

Over-crowded conditions also cause the turkeys to be unnaturally aggressive. Rather than make changes to the environment, painful alterations are made to the birds’ anatomy. To keep them from pecking at each other, half of the upper beak is cut off and the lower beak is blunted; no anesthetics are used. In the weeks after the painful de-beaking, the birds have to learn how to drink and eat with their deformed beak. 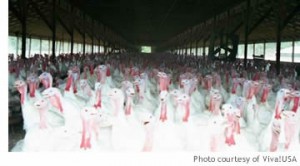 In addition to de-beaking, the turkeys must endure another mutilation. A significant portion of each toe is clipped off to keep the birds from “damaging” each other during the mating season. Once again, no anesthetics are used. The birds walk differently from that day forward. Males experience the added pain of having their snood cut off, since it serves no purpose in this artificial environment.

Over the past several decades, industrially farmed turkeys have been selectively bred to an extreme. They grow so fast and large that their bones and organs cannot keep up. Many of the turkeys die prematurely as their legs and hearts are strained to the point of failure. Those who don’t succumb to fatal injuries are slaughtered at 16-24 weeks of age.

Transporting turkeys to the slaughterhouse is an extremely traumatic event. Before they can be loaded into the trucks, they must be physically collected. Workers disperse throughout the shed, snatching up the turkeys and forcefully loading them into transport carts as fast as possible. In the process, many of the turkeys suffer broken wings and legs. The crates are then loaded onto large flatbed trucks. During transport, the unfamiliar sights, smells, sounds and movements cause severe stress.

Current laws allow transporters to travel up to 28 consecutive hours without a rest period. The 28-hour period can be extended to 36 hours by simply submitting a written request. [1] During this time, the turkeys are deprived of food and water. Many do not survive the trip.

When the turkeys arrive at the slaughterhouse, the crates are unloaded and stacked onto conveyer belts. One by one, the turkeys are removed from the crates and shackled by their feet. Hanging upside down, they struggle to free themselves as they are passed through an electric water bath designed to stun them before they are killed. In many industrialized animal factories, the killing lines move so quickly that many of the turkeys are not properly stunned. The next station consists of automated blades that cut their throat as they pass by, causing them to slowly bleed to death. Those who were not properly stunned either suffer a slow painful death, or manage to avoid the automated blade. However, their fate is the worst of all, as the next station is a scalding tank designed to remove their feathers. Poultry scientists acknowledge that when the turkeys do not bleed to death, they can regain consciousness before entering the scalding tank, in which case they are boiled alive. [2] Once the feathers have been removed, a series of eviscerating machines remove the head, feet and internal organs.

In the U.S., an estimated 46 million turkeys are killed each year for Thanksgiving alone.[3] Thanksgiving is a time when we celebrate our freedom, our liberties, our family and the little things that bring us happiness. It is sadly ironic that the holiday culminates with a meal that represents subjugation, deprivation, and intense suffering.

Of the 270 million turkeys killed annually in the United States, the vast majority are raised in industrial animal factories. A single slaughterhouse is capable of killing 360 birds per minute, or 518,000 in a 24-hour period. [2] Like all industrially farmed birds, turkeys are not covered under the Animal Welfare Act or the federal Humane Slaughter Act. They endure extreme stress from the time they are born until the day they are slaughtered.

Each of these birds is an individual, with a strong desire to avoid pain and seek pleasure. In industrial animal factories, turkeys are helpless in avoiding the cause of their suffering. Ultimately, our choices determine their fate and by choosing to go vegan, you can help end these abuses.