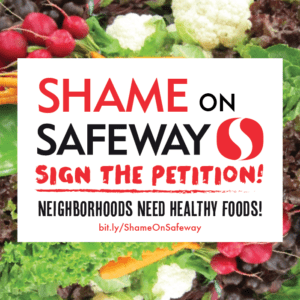 F.E.P. focused on Santa Clara County because, at the time, this is where we were based. I lived and worked in downtown San José, where there were liquor stores across the street from each other.

As a follow-up in Santa Clara County, the most impacted community in the county was found to be San José. We conducted focus groups there to find out from community members what the biggest barriers were and asked what they wanted and needed to improve the situation.

Because we only do our work in communities when invited, it was a request by David Hilliard (one of the founding members of the Black Panther Party) that took our work to Vallejo. We also worked with Vallejo People’s Garden, a community garden with volunteers and partner organizations throughout Vallejo. When we started our work in Vallejo, we had no idea that one of the contributing factors for the lack of healthy foods was going to be a grocery* store itself: Safeway.

At a public meeting, Vallejo Board of Supervisor Erin Hannigan informed us that Safeway had put a deed on their former property. This deed prevented another grocery store from using it for the same purpose. In our recently released Vallejo report, we highlight on page 15 the impact this had on the community, which left the neighborhood and surrounding areas without access to a grocery store.

Needless to say, I was absolutely disgusted and outraged to find out that Safeway was putting the health of communities at risk (including communities of color and some of the most vulnerable: the differently-abled and the elderly) and had the audacity to create such deeds. But I also knew Vallejo must not be the only community impacted by such greed.

We enlisted the help of Dr. Carol Glasser (who led the research on our report) and one of her students, Joseph Tope Sanni, and discovered that something similar had occurred in Washington, DC. I got in touch with a City Council Member’s office in D.C., who worked to pass a resolution in February of 2015 to stop this from continuing.

On May 27, 2015, I sent a letter to the CEO of Safeway (which is owned by Albertsons) urging Safeway to pass a policy to end the practice. On July 6, 2015, we received an unsatisfactory response from their VP of Public Affairs. We continued to engage with their VP until February of this year, when we realized that we were not going to get them to change their policy.

So we have decided to bring this disgrace to light.

We want to stop this damaging practice of placing deeds on former grocery store properties that don’t allow another grocery store from opening in the same location. All neighborhoods deserve the right to have access to fresh food!

We have had attorneys look at the legality of such deeds, and we know that even though it might be legal, it is immoral.

There are numerous barriers for people to be able to access healthy food—including the cost—because, unfortunately, many people are not paid living wages and many people are “time-poor and cash-poor”; they don’t have a lot of time OR money.  But barriers created by the very corporations that should be providing access to healthy foods should NOT be one of them.

Stopping this practice might just help communities across the U.S. gain access to healthy foods. At the bare minimum, stores should not stand in the way of access. Help us right this injustice!

Please join us in demanding that Safeway/Albertsons eliminate restrictive deeds on their former properties that prevent new grocery stores from replacing them.

*Please note that F.E.P. is not implying that grocery stores are the solution to the problems that face many communities, nor will they create a solution; however, this is clearly a massive barrier. F.E.P. prefers to advocate for people growing their own food, community-owned grocery stores (co-ops), and solutions coming from community input and with their support.