The diverse agricultural fields of the United States employ over 3 million people each year.[1] Despite the pivotal role these workers play in the stability of the U.S. food system, many of these men, women and even children work in unsafe conditions every day in exchange for a salary below the national poverty level. This injustice stems from the fact that many farms focus on maximizing profits at the expense of their employees’ health, safety and quality of life. Furthermore, U.S. labor laws that are designed to protect farm workers are poorly written and minimally enforced – enabling employers to exploit workers with little or no threat of penalty.

The vast majority of field workers are people of color living in rural low-income communities. Approximately 75% of field workers were born in Mexico and have either attained U.S. Citizenship, entered the H-2A guest worker visa program or remain undocumented.[2] Although exact numbers are not known, experts agree that undocumented workers represent a very high percentage of the overall workforce.

Many of the workers are actively recruited by labor contractors who promise them a good job and a better quality of life. These labor contractors charge workers a high recruitment fee, causing them to be indebted before their work contract begins. For many workers, this recruitment fee may be their entire life savings or more. Motivated by the need to financially support their family, workers pay the fees and accept the terms of employment.

When they arrive, workers often find the job to be different from what was promised. Lower wages and shorter job duration are common discrepancies between the contract they have signed and the work they are offered. Regardless of whether the discrepancies were intentional or inadvertent, both the farm owner and the labor contractor successfully avoid legal responsibility by blaming each other.

The reality of the situation is that some contractors operate under the table by paying cash wages less than the minimum wage, which is illegal.

Workers that speak out against their employers may face illegal threats of wage deductions, blacklisting, the withholding of passports, verbal and physical abuse or deportation in the case of undocumented workers.[3] Whether it’s due to a lack of labor laws or a lack of enforcement, state and federal labor agencies often fail to protect agricultural workers from these injustices. 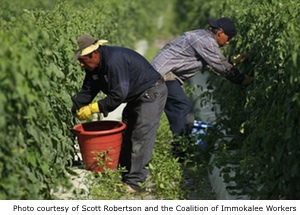 Agriculture is thoroughly dependent on physically demanding manual labor. Pruning plants, harvesting and packaging crops requires bending and reaching for hours on end. An average workday can be anywhere from 8 to 14 hours depending on the requirements set by the landowner or labor contractor.

The harvest period for each crop is determined by the season and geographic location of the farm. Consequently, many of the workers are migrant, traveling from region to region following the seasonal harvests. However, undocumented workers have great difficulty migrating due to the constant threat of deportation.

Today, workers struggle with many of the same concerns that were endured by previous generations of field workers. Although not perfect, unions can offer improved job security and possibly provide additional benefits. However, the industry has been largely successful in suppressing workers’ efforts to organize and bargain collectively.

According to the National Institute for Occupational Safety and Health, agriculture consistently ranks as one of the most hazardous industries in the United States.[4] Agricultural workers experience increased rates of respiratory diseases, noise-induced hearing loss, skin disorders, certain cancers, exposure to toxic chemicals and heat related illnesses.[5] There are few effective regulations in place to protect workers from these hazards. Most of the laws lack the personnel for enforcement or carry negligible penalties. In many instances, workers are afraid to report health and safety violations due to the threat of losing their jobs, or in the case of undocumented workers, the threat of deportation.

One of the most rampant hazards faced by field workers is prolonged exposure to heat. In many parts of the country, 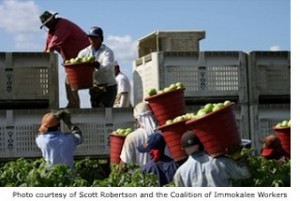 periods of peak harvest coincide with some of the most extreme weather of the region. It is not uncommon for men, women and children to work several hours in temperatures exceeding 90 or 100 degrees.

Under these conditions, access to drinking water and shade are absolutely essential to avoid the potentially fatal effects of heat illness. However, with the exception of California, the Occupational Safety and Health Administration (OSHA) has not implemented any specific regulations regarding the prevention of heat illness.[6]

California’s heat illness prevention program has yet to prove its effectiveness. Since the program first began in 2005, at least 11 farm workers have died as a result of heat exposure.[7] Furthermore, nearly 40% of the farms inspected in 2009 were in violation of the state’s new regulations.[7]

One of the most recent victims was 17-year-old Maria Isabel Vasquez Jimenez. Maria worked in the grape fields of Stockton, California, pruning the vines and picking the fruit. She died of heat stroke after working a 9-hour shift in 95-degree heat. Maria was two months pregnant at the time of her death. Two years before her death, Cal-OSHA had fined Maria’s employer, Merced Farm Labor, for not providing adequate drinking water during workers’ shifts.[8]

An equally concerning issue is the fact that workers in the field are regularly exposed to a large variety of toxic agricultural chemicals. Each year, 10,000-20,000 U.S. agricultural workers are clinically diagnosed with ‘pesticide’ poisoning.[1] Long-term exposure to agricultural chemicals is associated with severe health effects such as cancer, neurological disorders including Parkinson’s and Alzheimer disease as well as infertility and reproductive complications.[9,10,11,12]

Whether it’s due to budget constraints or pressure from chemical manufacturers, federal agencies continue to permit the use of agricultural chemicals that expose workers to serious known health risks.

The Centers for Disease Control (CDC) identifies agriculture as the most dangerous industry for
youth. [13] Despite this fact, current U.S. law allows children as young as 12 to work in the fields.[14] These children are four times more likely to be injured on the job than youth in any other
industry. [13]

Child labor advocates say that it is common to find children even younger than 12 working in the fields. A recent investigation in Michigan found children as young as 5 years old harvesting blueberries in the fields of Adkin Blue Ribbon Packing Company, a former supplier of Wal-Mart.[15]

It is unfortunate that many times when stories of child labor make it into the news the root of the problem is never truly addressed. Children who work in the fields are doing so out of necessity as their parents are not being paid a living wage.

Most agricultural workers have an extremely poor quality of life. Although they work an average of 42 hours a week, 36% of the families have a combined income below the national poverty level.[2]In addition, only 8 to 12 percent of workers are covered by employer-provided health insurance.[2]

Female workers suffer from institutionalized sex discrimination and acts of sexual harassment. Many employers do not have policies in place to deter supervisors and other employees from participating in acts of harassment. In fear of losing their jobs, the targeted females resign themselves to living under these degrading conditions.

After a long day, most workers go home to run-down housing structures that are unsanitary and often unsafe. They struggle to provide adequate nutrition for themselves and their children. In many cases, workers are unable to afford the very foods they labor to produce. Considering that the average field worker has a sixth-grade education, the children of field workers have little hope of going to college or even finishing high school.[16] The vast majority of families will never have the opportunity to break this cycle of poverty.

Hope for a Brighter Future

In an industry dominated by corporate greed and insufficient worker protections, there are some farms that treat their workers with respect and pay a living wage. These farms respect workers not just for their labor, but also as valuable members of the community. As consumers become increasingly aware of the plight of farm workers, the hope is that more farms will respond to consumer demands and treat their workers with the dignity and respect they deserve. 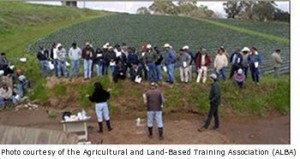 Food Empowerment Project hopes for an increase in the number of farms taking action for the farm workers, and is very happy that there are a growing number of programs dedicated to empowering field workers to become farmers. Many of these workers are first or second generation farmers from the US and Mexico. With an emphasis on community-based agriculture, the programs build on the workers’ current knowledge and skills by teaching them the principles of organic farming and business management. After completing the program, workers are invited to lease communal land from the organization and sell their crops at the local farmers markets.

These training programs provide workers with an opportunity for a better quality of life. When workers are empowered to become farmers, they are no longer reliant on employers who jeopardize their health and safety and pay them poverty-level wages. Although these programs can only accommodate a small number of workers each year, they are an important step in the right direction. Comprehensive federal reform is still desperately needed to protect all field workers from known safety hazards and to promote equality in the workplace.

The women and men working in the fields each day deserve the same respect and quality of life as any other hard working laborer. As consumers, we are in a position to help improve their lives with each purchase we make. In the absence of a mainstream label for responsibly grown produce, we must actively seek products from ethical farms. These farms provide a safe and healthy work environment, exclude child labor and pay their workers a living wage. Also, buying organically grown food whenever possible will help reduce the number of workers exposed to harmful chemicals.

Food Empowerment Project encourages a vegan lifestyle based on compassion and respect for all forms of life. It is vital that our compassion and respect extend not only to the animals who are so horribly mistreated, but also to the workers who provide us with the fruits and vegetables that sustain us. As consumers, we can promote social justice and equality by supporting farms that value and respect their workers.

Food Empowerment Project would like to thank CATA, El Comité de Apoyo a Los Trabajadores Agricolas, and Michael Smith, attorney, for their support and time in reviewing this section.

[16] “Findings from the National Agricultural Workers Survey: A Demographic and Employment Profile of United States Farmworkers.” U.S. Department of Labor (DOL) –
Office of the Assistant Secretary for Policy Office of Program Economics. 2000.http://www.doleta.gov/agworker/report_8.pdf (7/7/10)