Genetically-modified organisms (GMOs) are plants or animals created in laboratories by inserting genes from one species into the DNA sequence of another, thereby producing new life forms that never existed before with specific characteristics (such as, for agricultural purposes, increased water retention or the ability to grow faster on less feed). Nanotechnology is also increasingly being used to create new foods and food packaging by breaking matter down into microscopic nanoparticles that are just atoms wide and “programming” them to perform specific tasks. A range of nanotech applications for food have been used and proposed, from packaging (e.g., forming an air-tight vacuum seal) to taste (e.g., mimicking the flavor and texture of familiar foods). While these two technologies have been used in food production for decades, particularly in the US, neither has been proven safe—and both present dangers to the environment, workers and consumers.

The GMO creation process shares similarities with the millennia-old selective-breeding techniques humans have used since the birth of modern farming to domesticate wild plants and animals. That is, both methods focus on “customizing” living organisms for agricultural purposes. However, there is a major difference between the two technologies: whereas selective-breeding strictly limits gene-sharing to closely-related species, genetic engineers modify organisms by combining the genes of completely divergent species—and even splicing plant and animal DNA together. The most well-known example of this is the infamous “Flavr Savr” tomato created by splicing a modified arctic flounder gene into the plant’s DNA to make it frost-resistant. The US Food and Drug Administration (FDA) approved the product for sale in 1994, but it was taken off the market in 1997 because of abysmal sales. [1] 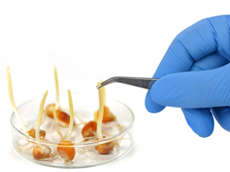 US consumers have been eating genetically-modified (GM) crops since the early 1990s,[2] and today, more than two-thirds of the processed foods sold in the country’s grocery stores contain GMOs.[3] The pervasiveness of GM foods in the US is driven by sheer agricultural volume: more than two-thirds of the world’s total GM acreage is in the US,[4] and 89 percent of the soybeans and 61 percent of the corn grown in the US are genetically-modified.[5] Since their inception, companies that produce GMOs have claimed that their technology will create foods with enhanced nutrition and greater plant density per acre of farmland—yet only 0.1 percent of GMOs have increased nutritional content or crop yields.[6] In fact, studies show that most GMO crop yields are lower than their conventionally-grown counterparts.[7]

Having successfully saturated the US market with GMOs, powerful biotech corporations are consolidating their economic control over the global food supply by displacing traditional farmers around the world. GM technology itself has even infiltrated non-GMO farms, hurting farmers agriculturally and economically. This happens when wind or insects carry pollen from GMOs to neighboring farms as far as several miles away and sprout among the conventionally-grown crops. This is especially problematic for organic farmers, because their produce can no longer be organically certified when it is contaminated with GMOs[8]—and one of the largest biotech corporations, Monsanto, has actually sued organic farmers whose farms were polluted by their patented plants.[9] Monsanto has even patented “terminator seeds” that can be planted only once, allowing the company to make farmers buy a new supply every year instead of saving seeds from previous seasons.[10] In 1999, Monsanto announced its intention to not market “Terminators” in response to widespread public outcry, and these seeds are not commercially available at present.[11] Nevertheless, biotech companies continue to patent such genetic use restriction technology, and may yet move ahead with commercializing it. This system of licensing the growing of plants as trademarked intellectual property leaves many nations, especially developing ones, in a bind: if they adopt GM farming techniques, their farmers face these problems and become dependent on corporations for the technology; if they don’t, they face stiff importation competition from countries that do.[12]

Since GM crops can be patented in the US, it is legal for corporations like Monsanto to restrict independent scientific research on the seeds; therefore, it is almost impossible for an independent entity to verify their claims. Seed producers maintain that GM crops are superior to traditional crops.[13]

These are just some of the reasons that the European Union maintained a longstanding ban on the growth and importation of GM foods. However, US food corporations effectively ended the EU’s moratorium on GMOs in 2006 by lobbying the World Trade Organization, which ruled that prohibiting this technology in the European economic territory violated an international commerce clause.[14] Similarly, in 2009, Mexico lifted an 11-year ban on growing GM corn to compete with US growers. Being that corn originated in Mexico and continues to be of profound cultural importance to the country, traditional farmers fear that the new strain could cross-breed with the dozens of native Mexican maize varieties, permanently altering their DNA.[15]

While GM crops increasingly dominate the agricultural sector, the US government has not yet approved “meat,” dairy and eggs from transgenic animals for human consumption.[16] However, several companies are already petitioning the FDA to authorize their experimental species’ flesh for sale. Examples include:

If the FDA does approve GM animals for commercial production, they will not require companies to label these products any differently than “meat,” dairy and eggs already available to consumers.[19]In addition, the welfare of GM animals remains completely unregulated because the inadequately-enforced federal Animal Welfare Act does not apply to animals used in agriculture or agricultural research. Agriculturally-transgenic animals therefore routinely suffer from high rates of birth defects, disabilities and premature death as a result of having their DNA experimentally manipulated.[20]

Some of the documented and potential environmental impacts of GMOs include:

Gene flow – Pollen from GMOs can be carried through the air and mix with the DNA of other plants, resulting in hybrid species. This happened in North Dakota in 2010 when GM canola was discovered growing in the wild with an herbicide-resistant trait that did not previously exist either on the farm or in nature.[22]

Invasive species – GM animals could also escape into the wild and potentially displace native fauna by out-competing them for habitat and resources (e.g., fish who are genetically engineered to grow faster or larger than they naturally would). GM animals could even potentially cross-breed with wild species, irrevocably mutating their genetic code and decimating their populations in the process.[23]

Overuse of agricultural chemicals – GMOs require more agricultural chemicals (i.e., herbicides and insecticides) than conventionally-cultivated crops because many GM plants are deliberately designed to be highly resistant to these toxic compounds.[24] Some GMOs even produce their own pesticides.[25] These unprecedented innovations have led to the unintentional evolution of herbicide-resistant superweeds[26] and superpests[27] that can only be killed using greater amounts of toxic chemicals.[28]

The heavier reliance on agricultural chemicals associated with GM crops exposes farm workers to increased amounts of toxic compounds, jeopardizing their health. There have also been cases in which people working on and living near farms growing GMOs suffered allergies and sickness from touching and breathing in pollen from the crops.[29] Entire farming communities are also drastically impacted when large corporations start growing GM crops. In South America, for example, thousands of families that farmed the land for generations have been displaced to urban slums because they cannot compete with agribusiness conglomerates growing GM crops. Some who protested losing their livelihoods have even been killed by paramilitary squads.[30]

The health risks of consuming GMOs are still unknown, because comprehensive long-term studies have not been done, but experts cite allergic reactions as one of the gravest concerns. For instance, people with severe nut allergies have no way of knowing whether GM foods contain DNA from nuts. Novel gene combinations present in GMOs could also create allergic reactions that did not previously exist. Other concerns about GMO consumption include new types of gastrointestinal disorders (caused by imbalances in intestinal flora) and resistance to antibiotics.[31]

Nanoparticles are now used in hundreds of consumer products, from potato chip bags to baby food—even some fruits and vegetables are treated with nanocoating to lengthen their shelf life.[32] But even though nanoparticles have been used in food manufacturing for decades, no one really knows how prevalent they are because (just like GMOs) the FDA does not require companies to label nanofoods or even report their use in food products.[33] However, nearly 20 of the world’s largest food manufacturers maintain in-house nanofood labs (including Nestlé, Hershey, Cargill, Campbell’s, Sara Lee and Heinz), and some industry experts speculate that 40 percent of US food products will contain nanoparticles by 2015.[34]

One of the ecological problems with nanotechnology is that certain types of matter that are stable on the macro scale can be volatile on the micro level. For example, antimicrobial properties of nanoparticles can disrupt signals between bacteria and plant hosts and transmit contaminants, which can endanger entire ecosystems.[35] Studies have shown that the nanosilver particles used in food packaging can interfere with organisms’ DNA replication.[36] Nanoparticles are so small that sewage treatment cannot filter them out when they are washed down drains, so they enter aquatic ecosystems where, research has found, they can kill and mutate fish embryos.[37]

In 2008, government scientists with the National Research Council released a report charging that the FDA, Environmental Protection Agency (EPA) and other federal agencies responsible for regulating nanotechnology do not have an adequate plan to determine whether it endangers the environment and human health.[38] Notably, just as the early purveyors of GMOs claimed their technological advances would increase food output while reducing pollution, so do nanotech advocates insist that their methods will produce food and other products more efficiently and cleanly by conserving natural resources. However, critics point out that nanotechnology production requires excessive amounts of water, energy and toxic compounds.[39] Clearly, those who stand to make fortunes from GMOs and nanofoods have strong economic incentives to accentuate the positive aspects of their technologies while de-emphasizing the dangers.

Some nanoparticles used in food production are so small that they can be absorbed through the skin, posing potential health threats to workers who are regularly exposed to such materials. One study demonstrated that even very low concentrations of zinc oxide nanoparticles are toxic to human lung cells under controlled laboratory conditions.[40] People working with nanoparticles inhale these micro-poisons on a regular basis.

Other studies have shown that nanoparticles can penetrate cell membranes and the blood-brain barrier when ingested, damaging DNA and causing cancer, as well as heart and brain disease.[41]Some nanoparticles used in food products, like nanosilver and silica, cannot be broken down by the body, and could potentially accumulate and cause illness.[42] Despite these dangers, the vast majority of nanoparticles used in food production have not been safety tested by the FDA or other government regulatory agencies.[43]

How You Can Help

Unfortunately, government-regulated organic standards do not currently prohibit the use of nanoparticles, making it difficult to entirely exclude these microscopic materials from your diet. One resource that can help is the Consumer Products Inventory compiled by the Project on Emerging Nanotechnologies. This database lists “1,000+ manufacturer-identified nanotechnology-based consumer products currently on the market.”*

The prevalence of GMOs and nanoparticles in food makes it all the more important to voice your concerns about these issues by urging your elected officials to pass legislation requiring mandatory labeling of all foods containing GMOs and nanoparticles so consumers can make fully-informed choices about what they purchase and eat.

You can also encourage Congress to pass laws that make agribusiness corporations pay out when their production methods and products damage the environment or make workers and consumers sick.

*Please note, although Food Empowerment Project is linking to other organizations, we do not necessarily endorse the entire content of their website or mission.

[3] “A Food Foresight Analysis of Agricultural Biotechnology: A Report to the Legislature.” California Department of Food and Agriculture. January 1, 2003. www.cdfa.ca.gov/files/pdf/ag_biotech_report_03.pdf (01/01/11)

[12] Pechlaner, Gabriela. and Otero, Gerardo. “The Neoliberal Food Regime: Agricultural Biotechnology and the New Division of Labor in North America.” Paper presented at the annual meeting of the Rural Sociological Society, August 02, 2007. (01/01/11)