*Food Empowerment Project (F.E.P.) recognizes the problem with the term food desert, defined by the USDA as mostly being about proximity to food providers, rather than considering other factors such as racism, cost of living, people being time poor and cash poor, cultural appropriateness of available foods, the ability of people to grow their owns foods, etc. F.E.P. considers terms like food apartheid and food oppression to be more accurate, but since food desert is the term that is most commonly used, we have kept it as our title.

Food deserts can be described as geographic areas where residents’ access to affordable, healthy food options (especially fresh fruits and vegetables) is restricted or nonexistent due to the absence of grocery stores within convenient traveling distance. For instance, according to a report prepared for Congress by the Economic Research Service of the US Department of Agriculture, about 2.3 million people (or 2.2 percent of all US households) live more than one mile away from a supermarket and do not own a car. [1] In urban areas, access to public transportation may help residents overcome the difficulties posed by distance, but economic forces have driven grocery stores out of many cities in recent years, making them so few and far between that an individual’s food shopping trip may require taking several buses or trains. In suburban and rural areas, public transportation is either very limited or unavailable, with supermarkets often many miles away from people’s homes. 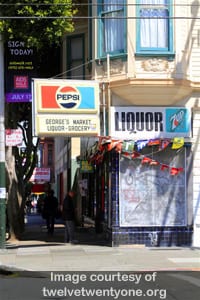 The other defining characteristic of food deserts is socio-economic: that is, they are most commonly found in black and brown communities and low-income areas (where many people don’t have cars). Studies have found that wealthy districts have three times as many supermarkets as poor ones do, [2] that white neighborhoods contain an average of four times as many supermarkets as predominantly black ones do, and that grocery stores in African-American communities are usually smaller with less selection. [3] People’s choices about what to eat are severely limited by the options available to them and what they can afford—and many food deserts contain an overabundance of fast food chains selling cheap “meat” and dairy-based foods that are high in fat, sugar and salt. Processed foods (such as snack cakes, chips and soda) typically sold by corner delis, convenience stores and liquor stores are usually just as unhealthy.

Food Empowerment Project’s report, “Shining a Light on the Valley of Heart’s Delight (PDF),” shows that it is possible to overlook communities that are located in food deserts when relying on data collected by the US government. We found that, “Part of the problem is how the US government’s North American Industry Classification System (NAICS is the standard used by the federal statistical agencies in classifying business establishments) categorizes retail outlets that sell food. According to the NAICS code, small corner grocery stores are statistically lumped together with supermarkets, such as Safeway, Whole Foods Market, etc. In other words, a community with no supermarket and two corner grocery stores that offer liquor and food would be counted as having two retail food outlets even though the food offered may be extremely limited and consist mainly of junk food.” 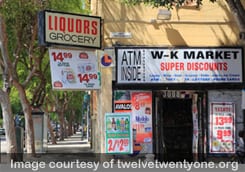 In addition to this, we found that many of the convenience stores that had items such as a bunch of bananas or a few apples would sell the fruits individually. Because these items are not priced, the customers are often at the mercy of the person behind the counter who determines the cost then and there. Customers who don’t have a good understanding of English might never ask the price of the item.

Those living in food deserts may also find it difficult to locate foods that are culturally appropriate for them, and dietary restrictions, such as lactose intolerance, gluten allergies, etc., also limit the food choices of those who do not have access to larger chain stores that have more selection. Additionally, studies have found that urban residents who purchase groceries at small neighborhood stores pay between 3 and 37 percent more than suburbanites buying the same products at supermarkets. [4]

Healthier foods are generally more expensive than unhealthful foods, particularly in food deserts. For instance, while the overall price of fruits and vegetables in the US increased by nearly 75 percent between 1989 and 2005, the price of fatty foods dropped by more than 26 percent during the same period. [5] While such inflation has strained the food budgets of many families regardless of their financial status, the higher cost of healthy foods often puts them entirely beyond the monetary means of many lower-income people.

While unhealthy eating may be economically cheaper in the short-term, the consequences of long-term constrained access to healthy foods is one of the main reasons that ethnic minority and low-income populations suffer from statistically higher rates of obesity, type 2 diabetes, cardiovascular disease, and other diet-related conditions than the general population. [6]

Whatever their age, obesity puts people at a greater risk for serious, even fatal health disorders (particularly coronary heart disease and diabetes, [7] the first and seventh leading causes of death in the US respectively): [8]

The incidence of diabetes among US adults doubled between 1996 and 2007, and “type 2 diabetes” (a variant of the disease that is often caused by obesity) [9] may account for 90 to 95 percent of these cases. [10] Only twenty years ago, type 2 diabetes was virtually unknown among people under 40 years old, but in the past decade it has increased tenfold among adolescents (mirroring this age group’s escalating obesity rates). [11] While the incidence of type 2 diabetes has risen across demographic lines in recent years, the greatest increases have occurred among black and brown communities. The highest rates of escalation have been identified in Native American youth [12] and African-Americans and Latinos of all age groups, with these groups suffering disproportionately higher rates of type 2 diabetes compared to whites. [13]These are also the groups most likely to live in food deserts, and researchers have established a strong correlation between food insecurity and increased diabetes rates. One study of Chicago neighborhoods found the death rate from diabetes in food deserts to be twice that of areas offering access to grocery stores, [14] while another conducted in California found that adults ages 50 and over from black and brown communities had double the diabetes rate of whites from the same age demographic. Researchers explain this disparity by emphasizing that the high-calorie foods most readily available in food deserts put residents living in these areas at greater risk for diabetes in the first place, and that having restricted access to healthy foods also makes it harder for them to manage diabetes once they are diagnosed. [15]

Heart disease causes more than 2.4 million deaths in the US every year. [16] One of the main causes of cardiovascular disease is a diet high in unhealthy fats and low-density lipoprotein (LDL) cholesterol [17] —typified by the types of fare commonly available in food deserts. Just as African-Americans are statistically more likely than other populations to live in food deserts, heart disease kills more blacks every year than whites [18] (despite the fact that whites make up almost 80 percent of the total US populace, and blacks comprise slightly more than 13 percent).[19] Even children and adolescents living in food deserts are at greater risk for cardiovascular disease (both now and when they reach adulthood) due to the increased prevalence of obesity in those communities. [20]

Public awareness of the formidable problems posed by food deserts is growing, thanks largely to the efforts of community activists, entrepreneurs and government officials committed to increasing people’s access to healthy food options. On the national level, First Lady Michelle Obama has spearheaded the “Let’s Move” campaign to combat childhood obesity, which includes a goal of eradicating food deserts by 2017 with a $400 million investment from the government focused on providing tax breaks to supermarkets that open in food deserts. [21] Many urban areas are also implementing initiatives locally to solve their food desert challenges.

Chicago – More than 500,000 residents (mostly African-American) live in food deserts, and an additional 400,000 live in neighborhoods with a preponderance of fast food restaurants and no grocery stores nearby. [22] Some food justice activists have sought to close this gap by opening food co-ops in underserved areas where supermarkets have historically been unsuccessful. In addition to selling fresh and organic fruits and vegetables, bulk whole grains and beans, and soy-based meat substitutes, some of these stores (like Fresh Family Foods on the city’s South Side) also offer cooking and nutrition classes to educate the public about making healthy food choices. [23]

Los Angeles – In 2008, the Los Angeles City Council voted to enact a moratorium on new fast food outlets in a 32-square-mile zone encompassing some of South L.A.’s most arid food deserts, an area where about 97 percent of the population is either Latino, African-American, or of mixed race. [24] Having fewer fast food restaurants created greater demand for more and better food choices, so Councilmembers subsequently passed another measure offering grocery stores and sit-down restaurants serving healthier meals financial incentives to open up in underserved communities. [25] These policies have so far succeeded in bringing the first new supermarket to South L.A. in about a decade. [26]

New York City – An estimated 750,000 New York City residents live in food deserts, [27]while about three million people live in places where stores that sell fresh produce are few or far away. [28] Supermarkets throughout New York City have closed down in recent years due to increasing rents and shrinking profit margins, but the disappearance of urban grocery stores has had the most serious impact on low-income communities, especially those that are predominantly African-American (such East/Central Harlem and North/Central Brooklyn).[29] To fill this void, the city started its Green Carts program, which has been bringing affordable fresh fruits and vegetables to underserved areas while providing jobs for vendors since 2008. Hundreds of Green Carts are already on the streets in food deserts, and that number is rapidly increasing as prospective vendors obtain training, licenses and permits from the city.[30]

What can I do if I live in a food desert?

If you recognize that you are living in a food desert, you can start by helping those in your community understand what this means and talk about ways to make change. Discussing different options, such as growing your own food, working with local retailers to sell healthy, vegan foods, etc. is a good place to start. It is also important to bring your ideas and concerns to policy makers—city councilmembers, state legislators, etc.

To learn more you can also reach out to others who have worked on this issue.

If you are interested in using Food Empowerment Project’s survey that was the basis for our report, “Shining a Light on the Valley of Heart’s Delight (PDF),” please contact us.

[11] Rates of new diagnosed cases of type 1 and type 2 diabetes on the rise among children, teens. (2017, April 17). Retrieved December 06, 2017, from https://www.nih.gov/news-events/news-releases/rates-new-diagnosed-cases-type-1-type-2-diabetes-rise-among-children-teens

[12] Rates of new diagnosed cases of type 1 and type 2 diabetes on the rise among children, teens. (2017, April 17). Retrieved December 06, 2017, from https://www.nih.gov/news-events/news-releases/rates-new-diagnosed-cases-type-1-type-2-diabetes-rise-among-children-teens

[17] “The Truth About Fats: The Good, the Bad, and the In-Between.” Harvard Health Publications. 2015. Retrieved from https://www.health.harvard.edu/staying-healthy/the-truth-about-fats-bad-and-good (9/5/17)