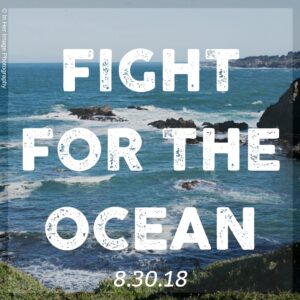 As some of you might remember from my previous blogs, sharks are my favorite animal. I love the ocean and everyone and every thing in it. I feel as if I am constantly drawn to it, which makes the fact that I get seasick a horrible irony.

I have always loved the ocean, even though growing up in Texas a visit to the ocean was at least four hours away. When I was in high school, I took a marine biology class as an elective because I wanted to be a marine biologist. I remember watching a film showing barrels of toxic materials being dumped into the ocean and they stated they would last for 50 years. I found that incredibly concerning and was surprised that they didn’t explain what was going to happen when those 50 years were up.

Later, as part of the course, we had a weekend field trip to the coast where we got on a boat that dredged up as much as its huge net could hold. They dumped a variety of sea creatures on the deck of the boat. Admittedly, it was amazing to see these incredible animals, but at the same time, it was clear they were suffering. A friend and I spent the entire time picking up the animals and putting them back in the ocean as quickly as we could.

I also refused to dissect as part of this course. I remember the teacher pulling me out in the hallway and telling me I was a big baby! She kept saying I was acting like a baby, that I would never be able to be a marine biologist, and that I had to dissect. Of course I didn’t.

When I went to college, I was still planning on being a marine biologist and so when I started my first day of the biology class, I explained to the professor that I did not plan on dissecting and asked that he provide me with something else to do. I did tell him about the alternatives that existed at that time.

Recently, I watched a documentary on Netflix called Mission Blue. I played it in the background as I worked, figuring this was another documentary about people exploring the ocean. But as I started to catch bits and pieces, I realized it was about a woman exploring the ocean. Then, in response to a question, I heard her say, “I don’t eat fish.” Sorry for the pun, but I was hooked.

As I know not everyone has access to Netflix, I just wanted to share some of this film and why she inspired me.

In an interview she is asked if she is radical about protecting the oceans. I loved her response, as I could truly relate to it. She said that if she seemed like a radical it might be because she sees things others do not (as she has spent thousands of hours diving), and that if others had the opportunity to see what she has seen, along with the perspective she has gained, she would not seem like a radical.

Dr. Earle, who is now 83, talks about how much the world has changed in her lifetime which makes it more real and, of course, sad.

She said that 60 years ago people did not believe that we could harm the ocean, which puts those barrels I saw in the film being dumped into perspective. This seems so hard for me to believe, but we have had such ignorant rationalizations regarding our treatment of not only this planet and of non-human animals but also our treatment of humans.

As she often points out, however, now we know better, and we need to do something.

She empathizes with the animals about how they have no idea why their world is changing, but we know why.

Even the filmmaker talks about not knowing who she was before he saw her speak, and that is a huge reason why I am writing this blog.

Young girls and women need to know about her and her work.

In fact, the only women interviewed in the documentary are Dr. Earle herself and her daughter; other than that, it’s mainly white men (even in Mexico, no Mexicans were interviewed), so it is really important for us to make sure people know about women like Dr. Earle, as they will inspire even more women to do what they want to do.

I was annoyed during parts of the documentary as she was asked about her previous marriages, how they ended, if she had children, and how she balanced her passion and her family. I feel as if I rarely hear men asked about balancing their lives.

The documentary also showed how the media focused on her being a woman on her explorations with coverage quotes such as “70 men and one woman” or “five women and one blow dryer.”

One of my favorite exchanges:

Interviewer: So you sort of became famous after this. I mean, you became a bit of a public face for science. And it was also great ‘cause you were not only smart, but you were beautiful and you made that okay.

Sylvia: Well, never occurred to me that it wasn’t okay.

Unfortunately, the film doesn’t go into what she was up against being a woman in this field in the 1950s, but they did have another great quote from her about one of the explorations: It didn’t occur to her that women need not apply.

I love that she didn’t sugarcoat things.

In 1990, by presidential appointment, she became the chief scientist for the National Oceanic and Atmospheric Administration. She talks about how she went to only one meeting of the fisheries council and was never allowed to go again. She told them to stop killing blue fin tuna—she ended up resigning.

I also appreciated her humility while she encouraged other people to dive. “If I can do it, you can do it. I’m not Superwoman.” Though scuba diving is an expensive endeavor, I did appreciate that she wanted it to seem like you didn’t have to be a man or “special” woman to be able to do it.

I am also writing this blog because I loved that Dr. Earle was not one to refer to those living in the oceans as statistics. It was again what happens when women get their voices heard. She spoke about the animals.

She talks about how the animals are innocent.

Discussing BP’s oil spill in the Gulf, she talks about how frustrating and agonizing it was to watch because she was aware of all that was there.

It is one thing to want to explore the oceans and share with others who live there, but it is so much more important to fight for them.

One of her explorations allowed her to live underwater for two weeks:

“Outside with the creatures and you get to know them as individuals. You actually see this group of five angelfish that are always there first thing in the morning and they have different attitudes, different personalities. That’s I think what has given me a different perspective than most probably have. Not just about the ocean but about the creatures who live there.”

She also talks about the need to not kill these animals for any reason:

“We don’t have to kill fish to get the omega oils that we really value and that are good for us. We can get them from the plants that the fish eat.”

She went to a fish market where there were rows and rows of tuna. You could tell in her face that she was pained and talked about them being babies.

To think of all the sea critters who are killed by the billions.

Towards the end of the documentary, Dr. Earle stated, “If I could be born anywhere in time it would be now because we know and we understand what we didn’t know 50 years ago.”

Food Empowerment Project is declaring August 30, Dr. Earle’s birthday, to be Fight for the Ocean Day. I don’t think we can be passive. We must fight for every living creature in the ocean—for their lives.

We are calling on people to:

If you live near a sea shore, grab a bucket and some friends and spend a few hours cleaning up to help the ocean and all who live there!

As someone who has never lived close to the ocean, I understand that you might not live near one, either —so clean up the lakes, streams, and rivers.

F.E.P. will be organizing a clean-up in the North Bay, and we hope you can join us!

These animals suffer tremendously and we MUST do our part to stop the suffering we inflict on them (and all animals) and the ocean. Please stop eating them.

You can learn more here:

Typically, I am very uncomfortable asking for donations, but I have so many ideas on how we could create a larger campaign to fight for the oceans.

In honor of my 30-year vegan anniversary, and to help get programs like this off the ground, please consider a donation: https://food-empowerment-project.networkforgood.com/projects/50588-30-years-of-activism