Food Empowerment Project (F.E.P.) understands that many consumers care how workers are treated, and, unfortunately, labels don’t provide much information or give a good idea about what transpired while making the product.

Chocolate is no different when it comes to the immense amount of abuse that takes place—from child labor to slavery—in areas of Western Africa.

As part of our work on chocolate, we believe that transparency is an important step corporations can take to show they are addressing the issue seriously.

F.E.P.’s chocolate list includes companies we do not recommend due to a lack of transparency, and our goal is to push each of these companies until they take this issue seriously enough to disclose. 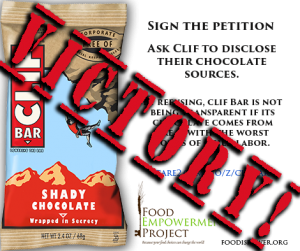 In May 2011, after receiving emails from some of our supporters that Clif Bar was telling them that the source of their cacao was proprietary, F.E.P. contacted Clif Bar & Company to make an official inquiry.

After not receiving a response, in July 2011, we spoke to someone in Clif’s communications department, as well as their sustainability manager, but Clif Bar would still not disclose the country of origin of their cacao.

In June 2012, F.E.P. started an online petition addressed to Clif Bar requesting for transparency given the severity of the issue.

Two months later, we reached out to Clif Bar’s CEO, saying that we understood it might take time for them to gather that information and offered to speak with them. We did not receive a response.

Due to an outside circumstance in September 2012, we met again with Clif Bar, this time with their Director of Environmental Stewardship, and again were told that the country of origin for their cacao was proprietary. We were told to connect back after six weeks, which we did, yet nothing changed (see Jan., 2013 update).

We continued to engage and encourage people to reach out to Clif Bar via social media and kept collecting signatures on our petition.

In July 2013, we organized other groups to join us in asking Clif Bar to be transparent.

Early in 2014, we began to investigate other avenues to obtain this information, and we were thrilled when activist/journalist Mikko Alanne wrote a piece about this for The Huffington Post in July, “Why Clif Bar Must Disclose the Origins of Its Cocoa“.

In late 2014, Care2 threw in their support.  Clif Bar Won’t Reveal its Cacao Source. This Care2 Member Won’t Stop Until it Does.

By December, F.E.P. was prepared to deliver our petition with more than 83,000 signatures to Clif Bar’s headquarters on the 10th (Human Rights Day); however, on December 2nd, Clif Bar informed us that they were disclosing the country of origin for their cacao (see Clif Bar’s statement on ingredients).

Although their sources include countries where the worst forms of child labor have been frequently documented, corporate transparency is the first step needed to help consumers make informed choices.