It is frightening enough that the Earth’s human population has nearly tripled since 1950,[1] but even worse is that our species now eats more than five times more meat than we did back then.[2] These days, over 50 billion land animals are killed for food worldwide every year[3] – and that number is expected to double by 2050[4] with rising incomes in large, rapidly-developing countries driving a major shift in global dietary patterns as those societies strive to emulate the West’s eating habits. The factory farming techniques that make the mass-production of “meat,” dairy and eggs possible cause incalculable harm and cruelty to animals, the environment and people—so why would these countries choose to follow this path?

The main reason is that some multinational agribusiness companies see serious profit in expanding their operations to largely untapped emerging markets. These corporations have already saturated the Western world with their products,[5] so in order to maintain their economic superiority, companies must break into countries where consumer demand for “meat” and animal products is rising, environmental and animal welfare regulations are lax, and labor is enticingly cheap.[6] Namely, established agribusiness giants are actively advancing into Asia and nations in the Global South—threatening to supplant traditional agrarian practices and wreak the very same kind of havoc they have here in the U.S.

A brief look at the past provides a chilling glimpse into the planet’s potential food future. Consider the historical precedent of Tyson Foods, the world’s largest “meat” producer,[7] which in the late 1940s essentially invented the system of vertical integration that now serves as the model for industrialized animal agriculture. The core principle behind vertical integration is to have a single corporate entity own and control every aspect of the “meat” production process—from feed mills and hatcheries to slaughterhouses—so that farmers solely raise animals on contract for the company at reduced prices. This domineering system now sets the standard for the nation’s chicken industry, and can increasingly be found in cow and pig production.[8]

Six decades after its introduction, the economic efficiency of virtual integration now allows just four major companies to process over half the chickens, 80% of the cows, and 60% of the pigs consumed in the U.S.[9] And now, this business model is enabling these same few massive corporations to expand into the consumer territories of developing societies. We can begin to understand what this means for animals, the environment and people in other parts of the world by examining Big Ag’s recent commercial activities in some of these countries.

South America – In 2008, Tyson purchased two Brazilian poultry companies outright, and a 70% share in another, with a plan to use these acquisitions as a base for exporting chicken around the world. Brazil’s status as a major “beef” producer means that they already have an extensive network of plantations in place encompassing vast pastureland, making the transition to intensive “poultry” production a natural fit for Tyson’s takeover.[10]

As “poultry” production rises rapidly in Brazil, “beef” production is simultaneously increasing in Argentina, where ranchers already raise approximately 5 million cattle a year in feedlots.[11] Argentina was once the global marketplace’s leading “beef” supplier, raising “grass-fed cattle,” but with other countries around the world using factory farming methods to raise animals for food, Argentina soon followed. Raising animals on pasture not only requires more time before they can be killed, but also requires more land. As grazing land in Argentina has become increasingly scarce, more farmers have switched from cattle ranching to the more financially stable enterprise of growing animal feed, leading to more and more of these animals being fed on high-protein grains in densely-concentrated feedlots. With Argentinians consuming more “beef” per capita than any other people in the world, Argentina’s government is following the latest trends of factory farming by subsidizing the construction of new feedlots, each with the capacity to hold tens of thousands of cattle.[12]

Meanwhile, an estimated 97% of the world’s soy supply is now fed to livestock, and Argentina is a major soy exporter. Their northern neighbor Paraguay is also among the world’s top soy-producing nations, having dedicated 6.4 million acres to the crop, but their success in this field has not been without serious social costs. Cultivating feed for factory farmed animals in other countries has radically despoiled Paraguay’s environment, displaced rural communities, and prompted labor riots in which people have been injured and killed by paramilitary squads working for industrial growers.[13] 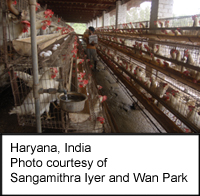 India – In 2008, Tyson also bought a majority share in Mumbai-based Godrej Foods Ltd. and expects to reap about $50 million a year in “poultry” sales throughout India. But the company may find that Indian society is less conducive to their vertical integration schemes than Brazil, because approximately 65% of Indians are employed in the agricultural sector, and the government strictly regulates farm sizes. In a country where about 780 million people make a living producing food,[14] Tyson’s top-down domination strategy faces real challenges. However, “meat” consumption (especially chicken) is rising in India as incomes grow, and drive-through fast food franchises are spreading at an exponential rate, so company heads figure that increasing demand for “meat” and more convenient means of distribution will work in their favor over the long term. 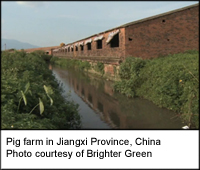 China – Fast food is a $28 billion industry in China today, where there are already more than 900 McDonald’s [15] and 2,000 KFC restaurants.[16] This is no surprise, given that China has one of the world’s fastest-growing economies, with a burgeoning middle class that sees “meat” as a social status symbol signifying wealth and privilege (much like the upwardly-mobile consumers in many other developing countries). To feed this demand for animal foods, China has courted agribusiness investment from the likes of Tyson, Smithfield Foods and Novus International, and is well on its way to becoming one of the world’s top “meat”-consuming countries. Yet, even as Chinese society increasingly emulates the Western-style diet, a legacy of ecological damage resulting from their currently unsustainable agricultural practices looms behind them, casting a dark shadow over a future that may prove even bleaker. That is, even though factory farming is not yet the main “meat” production method in China, almost a million acres of Chinese grassland are already reduced to desert annually as a result of overgrazing and intensive farming, and China surpassed the U.S. as the world’s top emitter of greenhouse gasses in 2008.[17] If factory farming becomes widespread in China, these problems—and many others—will become more devastating, not only to this country of 1.3 billion people, but to the rest of the world as well.

For decades, animals, people and the planet have suffered the severe consequences of factory farming as it is conducted in the Western world—and the export of this corporatized method of mass-production can only exacerbate the ethical, ecological and social problems it causes. The implications of Concentrated Animal Feeding Operations expanding across the globe are especially disturbing because most of the countries targeted by agribusinesses have even fewer animal welfare, environmental, health, and labor regulations than the U.S. or Europe, so the abuses inherent to factory farming would only worsen. Even as individuals we can make a positive difference by supporting activists in developing nations who proactively promote a vegan lifestyle and work to prevent these industries from gaining a foothold in their countries.