In nature, ducks have extremely active lives, yet they retain a tranquil demeanor that is relaxing to observe. They are among the most decorated animals on the planet-flaunting magnificent color combinations, intricate patterns and unique plumage. Their habitat ranges from serene woodland lakes to the vast ocean waters around the world.

Ducks’ lives revolve around water. Their health, happiness and general well-being are fully dependent on having access to the waters where they feed, mate and raise their offspring. This becomes obvious as you begin to analyze their highly specialized anatomy. A streamlined body structure along with strong webbed feet allows them to swim for hours while expending minimal energy. A fundamental aspect of this efficiency is the ability to maintain buoyancy. Using their bill to stimulate an oil gland near the tail, they spread the slick secretion over each surface feather, until a waterproof barrier is formed. Below the surface feathers is a layer of “down” feathers that forms a dense heat barrier and helps to ensure a healthy 104 internal body temperature.

When it comes to eating, ducks have evolved different strategies for partitioning resources. Some species are referred to as “dabbling” ducks-feeding primarily on vegetation and mature invertebrates near the water surface. Only when they are threatened will they dive below the surface. Alternatively, “diving” ducks feed on shallow aquatic plant material and immature invertebrates hiding in the muddy floor of the pond or lake. Most ducks will supplement these foods with occasional trips to the surrounding shore. Over their 15-20 year lifespan, they learn which foods are abundant at different times of the year, and where best to find them. They are very much in tune with seasonal weather patterns and will change their habits accordingly.

Most ducks are seasonally monogamous. In spring, the female leads the male to a breeding site. For some species, the site is the same location where the female hatched many years prior. After about 30 days of incubation, the ducklings hatch and are able to swim within hours. At the end of the mating season, the parents start on a specific migration path. Flying alongside their relatives at speeds up to 50 mph, some species will travel thousands of miles over a period of weeks. Other species are non-migratory, such as the Central and South American Muscovy.

In industrial animal factories, ducks suffer in conditions that deny their most fundamental instinctual needs. The most glaring example is the fact that their only access to water is in the form of bell drinkers or nipple drinkers-small pipes that dispense the water drop by drop. The ducks are able to drink from the pipes, but are unable to satisfy their strong instinct to immerse their feathers in water. Considering that their anatomy and physiology are highly adapted for a life in water, these ducks experience intense frustration and are more susceptible to painful eye infections that can ultimately lead to blindness. 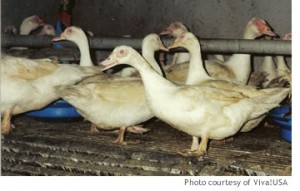 On most farms, thousands of ducks are housed together in large sheds with artificial lighting. Overcrowded conditions and a lack of natural stimulation cause the birds to peck and pull at their own feathers, and the feathers of nearby ducks. Rather than satisfy even their most basic instinctual needs, the industry chooses to cut or burn part of their upper bill without the use of anesthetics. Despite its rigidity, the bill is sensitive to pain and the trimming process is stressful. [1] Bill trimming likely results in both acute and chronic pain. [2]

Ducks have also been observed struggling to right themselves after being knocked over in the crowded pens. Getting back up is difficult because they have been bred to be unnaturally large. These stranded ducks often go unnoticed, and are either trampled by the other birds, or starve to death over a period of days. Unfortunately, overcrowding is a consistent and inherent trait of industrial animal factories. 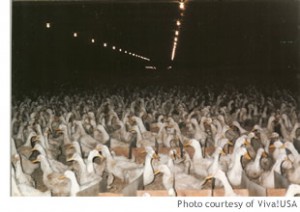 The floors of the shed are covered with wire mesh, litter, or a combination of the two. In these conditions, the ducks’ webbed feet are vulnerable to tears, abrasions and debilitating sores. A painful condition known as “bumblefoot” is also common, in which lesions on their feet become inflamed and infected. According to research from the University of Nebraska, “Abrasions from rough surfaces where birds perch or stand may contribute to the occurrence of this disease” and “Captive birds are more commonly found infected than free-ranging birds.” [3]

In contrast to their natural foraging habits, the ducks are given a corn and soybean-based pellet feed everyday. [4] Moullard ducks are force-fed multiple times a day in order to enlarge their liver and produce foie gras. The process involves inserting a long metal pipe down the duck’s esophagus, and several pounds of blended grains are pumped into the stomach. Over time, the duck’s liver becomes diseased, enlarging up to ten times its normal size-at which point it is sold as a “delicacy.” [5] In many cases, the metal pipe pierces through the esophagus, causing a slow, agonizing death. 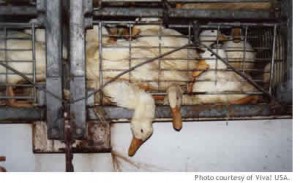 Transporting ducks to the slaughterhouse is an extremely traumatic event. Before they can be loaded into the trucks, they must be physically collected. Workers disperse throughout the shed, snatching up the ducks and forcefully loading them into transport carts as fast as possible. In the process, many of the ducks suffer broken wings and legs. The crates are then loaded onto large flatbed trucks. During transport, the unfamiliar sights, smells, sounds and movements cause severe stress.

Current laws allow transporters to travel up to 28 consecutive hours without a rest period. The 28-hour period can be extended to 36 hours by simply submitting a written request. [6] During this time, the ducks are deprived of food and water. Many do not survive the trip.

When the ducks arrive at the slaughterhouse, the crates are unloaded and stacked onto conveyer belts. One by one, they are removed from the crates and shackled by their feet. Their frequent quacking quickly fades to silence as they anticipate their death. Struggling to free themselves, they are passed through an electric water bath designed to stun them before they are killed. Ducks have been known to flail their head and neck as they pass through the water, resulting in improper stunning. The next station consists of automated blades that cut their throat as they pass by, causing them to slowly bleed to death. Those who were not properly stunned either suffer a slow painful death, or manage to avoid the automated blade altogether. However, their fate is the worst of all, as the next station is a scalding tank designed to remove their feathers. Poultry scientists acknowledge that when the ducks do not bleed to death, they can regain consciousness before entering the scalding tank, in which case they are boiled alive. [7] Their feathers are sold to companies that manufacture pillows and comforters.

Each year in the U.S. approximately 27 million ducks are killed for meat. [8] Like all birds, they are not covered by the Animal Welfare Act or the federal Humane Slaughter Act. Killed at only seven weeks old, these ducks are never able to fly or even touch the water. They never forage for food, preen themselves, have mates, or feel the warmth of the sun on their backs. Like billions of other animals, their most basic nature is compromised and their suffering is ignored. Fortunately, the path to a more harmonic and compassionate future is within our control, and adopting a vegan lifestyle can help put an end to this suffering.