In nature, sheep and goats live in secluded mountain grasslands where they spend the vast majority of their time grazing the diverse landscape. Bound only by their desire for fresh stream water, they wander through the lush hills, stimulated by a great variety of sights, smells, sounds and tastes. Both sheep and goats have evolved to be extremely dependent on a herd lifestyle, so much so that a solitary individual will quickly lose interest in grazing and become weak. In fact, nearly all of their tendencies can be traced back to their intensely gregarious social lifestyle.

Like cattle, sheep and goats are ruminants. They spend up to 10 hours grazing each day, followed by an equal amount of time ruminating— a digestive process in which fibrous plant material is stored in one chamber of the stomach (the rumen), fermented by bacteria, then periodically regurgitated and re-chewed. During this time, the animals appear noticeably relaxed as they groom themselves and each other.

Although sheep and goats are virtually defenseless, they have many physical adaptations that help them evade their predators. The combination of widely spaced eyes and large rectangular pupils allows for incredible peripheral vision. With the slightest movement of their head, they can spot a potential predator in the distance without drawing their attention. They communicate through a series of low-pitched vocalizations, tilting their ears to determine the source and location. Of all their keen senses, none are more vital to their survival than their acute sense of smell. Whether searching for nutritious foods, recognizing the smell of a potential predator in the air, identifying females in estrus (ready to mate) or picking out their offspring amongst dozens of identical young, a powerful sense of smell is an essential tool for survival.

Sheep is a generic term, referring to ewes (females), rams (males), and their offspring (lambs). Similarly, the term goat refers to does (females), bucks (males), and their offspring (kids). In late autumn, when the daylight hours lessen, the female begins to secrete larger doses of melatonin, a hormone responsible for initiating the reproductive cycle. After mating, she experiences a five-month gestation period culminating with a strong instinct to isolate herself from the herd. In the minutes after birth, she gently nuzzles her baby and intently licks the fur until it is clean and dry. The baby, using his/her sensitive lips and nose, signals the desire to suckle. When the time is right, the female will use her head to help her baby stand for the first time. In between bouts of play and socializing, young lambs and kids watch their mothers carefully to learn about their surroundings and how to survive.

In industrial animal factories, sheep and goats are confined in restricted pastures and crowded feedlots. Unlike their wild relatives, they never know the freedom of wandering for miles through diverse landscapes. Domesticated sheep and goats have been selectively bred over many years with an emphasis on breeding out survival instincts, and positively selecting faster growth, thicker wool and more milk. Over the past several decades, the market for these products has expanded throughout the world despite the fact that overall consumption is decreasing. In an effort to out-compete developing nations, U.S. and U.K. producers are turning to science.

In recent years, manipulating an animal’s environment has become standard practice for ensuring profitability. In an effort to supply meat for a large springtime demand, the industry forces sheep to give birth in the winter. In order to reverse their natural breeding habits, which are stimulated by exposure to sunlight, the sheep are kept indoors where light can be artificially controlled. As the artificial light is gradually increased, the ewes begin to secrete increasing levels of melatonin. In addition, many ewes are given hormones to trigger off-season estrus cycling. [1]

Sheep are also specially bred to produce unnatural quantities of wool. The process of wool shearing is much more traumatic than most people realize. It is well documented that the combination of restraint, along with the pressure and heat from the shears causes significant elevations in cortisol levels—the primary indicator of fear. Unlike other procedures, shearing remains a great source of anxiety and stress each time it is performed.

Sheep raised for wool and meat also face a variety of painful mutilations. Some of the practices are aimed at reducing the risk of fly-strike, where a fly lays eggs in feces that is stuck to the animal’s rear end. Once the eggs hatch, the larva can enter the sheep’s body and cause a painful death. Industrial farmers have attempted to solve this problem through a variety of crude practices. Over 90% of the lambs in the U.S. have their tails cut off at an early age. [2] This common practice is considered necessary to keep feces from accumulating in the wool. In many cases, tails are cut too short, and the lambs suffer rectal prolapse in which the tail muscles weaken causing the rectum to protrude from the anus.

The majority of male lambs are castrated to eliminate the risk of unplanned breeding and to tame natural behaviors. [2] The castration is performed without anesthetics, using a common scalpel or a variety of scissor-like tools. In some cases, an extremely tight rubber ring is placed over the scrotum, causing the testicles to drop off after several days.

Due to a variety of factors, nearly 20% of young lambs do not survive to the time of weaning. [2]Those who do survive are killed at 3-15 months old. If they have desirable qualities, ewes and rams may live for several years and breed many times before being killed.

Female goats endure relentless cycles of impregnation, birth, and milking, and in the United States, goat milk production is becoming more industrialized each year. After a doe gives birth, she is only able to offer her offspring a single feeding before they are taken away to be raised for “meat.” At one week of age, their developing horns are burned to a stump using a red-hot dehorner. When a doe is no longer producing a profitable volume of milk, she is sent to be slaughtered. 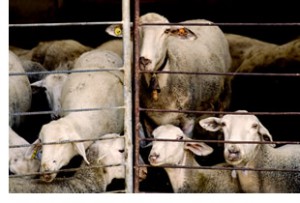 The process of transporting sheep and goats to a slaughtering facility is likely the most traumatic experience of their brief life. One by one they are loaded into large trucks where they huddle together in fear for the final hours of their lives. Current laws allow transporters to travel up to 28 consecutive hours without a rest period. For sheep, this period is extended to 36 hours if the 28-hour period ends at night. The fine for violating this law is a mere $100 to $500. [3] During this time, the animals are deprived of food and water. Throughout the journey, the sheep and goats sense a multitude of unfamiliar sounds and smells, and often travel through extreme weather conditions.

When the sheep and goats arrive at the slaughtering facility, they are unloaded, weighed, and placed in a restraining chute. Before being slaughtered, each animal is supposed to be rendered unconscious. The goal is to penetrate the brain but not sever the brain stem. If the brain stem is severed, then the heart would stop pumping blood and the animal would not bleed out as quickly or completely as desired. The tool most commonly used for this procedure is a captive bolt pistol. The pistol is placed firmly against the animal’s forehead and fired. A pointed bolt penetrates the brain causing the animal to spasm uncontrollably, and then collapse. After being shackled by a hind leg and raised off the ground, the sheep or goat is cut from the stomach to the throat and left to bleed. Many times, the animals regain consciousness due to improper stunning.

Although the demand for sheep and goat meat has been steadily declining for many years, 2.7 million sheep and nearly 1 million goats were slaughtered for their meat last year in the U.S. alone.[4]

Sheep and goats are not the only animals who experience the downsides of the domestication process. An increasing number of wild animals are killed each year to protect animals raised for human consumption. Under the guise of “Wildlife Services” the U.S. government subsidizes massive hunts to eradicate native predators from the surrounding woodlands and grasslands. A recent study by the Wildlife Conservation Society concluded that the industry’s decline is not due to conflict with wildlife, but rather the plummeting demand for their products. More than 268,000 native predators were killed in a single year, including coyotes, bears, wolves, bobcats and mountain lions. [5] These keystone predators are invaluable to the local ecosystem where they play an integral role in keeping all other animal populations in balance.

Industrial animal factories operate based on a theory of minimal care for individual animals. At every stage, the animal’s true nature is manipulated, suppressed and disregarded in an effort to drive down costs and maximize profit. Producing “meat,” milk and wool as cheaply as possible has many devastating implications for the animals. Millions of years of evolution and countless adaptations are largely ignored because they would decrease the efficiency of production. It is up to individuals to take a stand against these injustices by making the compassionate choice of adopting a vegan lifestyle.