In nature, pigs are essentially survivors-a relic family of mammals who thrive in conditions that few other animals can endure. As true opportunists, they are guided by their keen senses, complex reasoning, and tempered instincts. In their native forests and grasslands, resources are often inconsistent and unreliable. As a result, their diet is extremely diverse-including fruits, nuts, roots, eggs, bulbs, fungi and anything else that is available. Living in an environment of perpetual change, pigs have learned that their survival is dependent on a nomadic lifestyle, commonly traveling several miles each day. 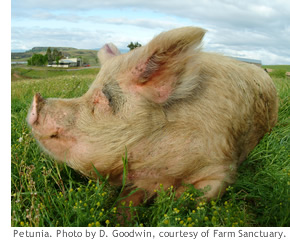 Descended from the European wild boar, domestic pigs share many of their ancestor’s physical features and behavioral tendencies. Cloven hooves enable them to run surprisingly fast, while thick skin and course hairs protect them from extreme temperatures. In areas with intense heat, pigs seek out shallow watering holes or large mud puddles. Perhaps most impressive is the pig’s highly specialized snout. A cartilaginous disc at the end of the snout allows them to forage through dense leaf litter and soil that other animals cannot access. Combined with an acute sense of smell, the pigs are able to locate fragments of food with astonishing precision-even through thick layers of snow.

The breeding season is an intense period for wild boars, but relatively uneventful for domestic pigs. In the wild, males become increasingly aggressive, using their tusks to establish a hierarchy. Most domestic pigs lack these tusks, as well as the instinct to fight.

As spring draws near, each member of the group helps to bring vegetation to the communal nesting site. At the end of the four-month gestation period, the female distances herself from the group, digs a small depression in the soil and lines it with the leaves and grasses that the others collected. The mother and her offspring band together with other mothers and reside in small groups known as “sounders.” The piglets spend much of their time playing-tirelessly wrestling and chasing each other. Mothers are extremely protective and vocal, communicating with their young through a variety of grunts and other calls.

Domestic pigs come from an ancient lineage of wild ancestors who evolved to live in harmony with their environment. They are curious, intelligent animals with strong instincts and a resourceful nature. Numerous researchers have concluded that pigs are more intelligent and have better memories than most dogs. Capable of living over 20 years, their lives are stimulating and complex.

In industrial animal factories, pigs live extremely monotonous lives, in varying degrees of confinement. Unable to fulfill their most basic instincts and desires, the pigs show many signs of physical deterioration and mental collapse. From the day they are born until the day they are killed, there is no relief from their intense frustration. 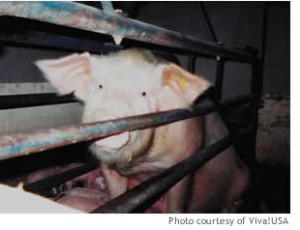 The process begins with the “breeding sows.” After being artificially inseminated, they are confined in what the industry refers to as a “gestation crate.” During their four-month pregnancy, they never leave the 2-foot wide crate that is essentially the length and width of their body. Unable to turn around, and barely able to lie down, the sows bite the metal bars of the crate in frustration. Even more disturbing is the sound of these pregnant pigs repeatedly banging their heads against the metal doors.

When she is ready to give birth, the mother pig is moved to a “farrowing crate” that is roughly the same size as the gestation crate. She is unable to turn around or take a free step. Over the next few weeks, the piglets nurse from their mother, who lies on the barren concrete floor. The area is occasionally hosed down to rinse the excrement into manure pits.

After two to three weeks of nursing, the young are removed and the female is impregnated once again, and returned to the gestation crate. This is how she will live until her breeding rate declines and she is killed.

Her piglets are taken to an area cryptically termed the “nursery.” They quickly become frustrated by the lack of stimulation and resort to biting and other aggressive behaviors. The industry’s solution is to cut off the piglets’ tails and clip their teeth. For identification purposes, part of the ear is cut out as well. These painful mutilations are performed without the use of anesthetics.

Once they have reached 30-80 pounds, the young pigs are transferred to massive sheds with concrete floors and minimal ventilation-what the industry refers to as a “finishing” facility. Here they are intensely fed until they reach the desired weight for slaughter. 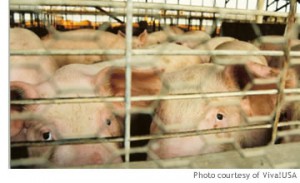 Some of the largest industrial farms house more than 5,000 pigs. [1] In these overcrowded conditions, the pigs’ acute sense of smell becomes a source of suffering as they are exposed to noxious levels of ammonia for several months. Respiratory disorders are not the only problems these pigs face. Crippling leg disorders are common due to the unnatural flooring, as well as a lack of exercise. In fact, many of the pigs do not survive long enough to reach the final weight of 270 pounds at approximately six months of age.

Pigs are transported to slaughtering facilities in large multi-level trucks. Current laws allow transporters to travel up to 28 consecutive hours without a rest period. The 28-hour period can be extended to 36 hours by simply submitting a written request. [2] During this time, the animals are deprived of food and water. Vomiting and diarrhea are common due to hours of vibration and maneuvering. Many of the pigs die before reaching the slaughterhouse due to either extreme weather or porcine stress syndrome (PSS)-a neuromuscular disorder that is triggered by physical and/or mental stress. According to the most recent USDA animal disposition report, in one year, nearly 277,000 pigs were dead when they arrived at the slaughtering facility. [3]

When the pigs reach the slaughterhouse, they are guided down a ramp into a restraining chute. The pigs squeal continuously as they are forced closer to the front of the line. When they reach the front, they are killed by one of two methods.

Many facilities kill pigs by electrocution. After being wetted down to facilitate electrocution, one electrode is placed on the pig’s forehead and another on the back. An electrical current surges through the pig’s brain and heart for 2-3 seconds, causing cardiac arrest and a fatal epileptic seizure. Many facilities electrocute only the head, which is considered potentially “reversible” if the animal is not bled completely within 15 seconds. [4] Many of the pigs in these facilities regain consciousness at some point in the bleeding process.

An alternative to electrocution is the use of a captive bolt pistol. This killing tool is designed to penetrate the brain but not sever the brain stem. If the brain stem is severed, then the heart would stop pumping blood and the animal would not bleed out as quickly or completely as desired. The pistol is placed firmly against the pig’s forehead and fired. A pointed bolt penetrates the brain causing the animal to spasm uncontrollably, and then collapse. The pig is then hung by a chain or cable, and cut from the neck to the abdomen. Again, many pigs regain consciousness during the bleeding process.

Once bleeding is complete, the pig’s body is dropped into a tank of scalding water to loosen the course hairs. A conveyer periodically turns the carcass as it passes through the tank. The killing line moves so quickly that some of the pigs are still conscious when they are dumped into the scalding tank. According to a USDA swine inspection guide: “A hog that is scalded alive dies from asphyxia and will frequently have a scarlet red appearance and have organs that are engorged with blood.” [5]

Each year in the U.S. approximately 118 million pigs are slaughtered by this protocol after enduring miserable living conditions. [6] Very shortly after birth, they learn that they are helpless in preventing the source of their suffering. Their instincts, keen senses and curious nature are thoroughly suppressed- causing a level of frustration that is beyond comprehension. It is obvious that producers care exclusively about healthy profits. Purchasing these products only serves to reinforce these inherently cruel practices, which no animal should have to endure and choosing a vegan lifestyle will put an end to the abuse and suffering of billions of animals.

[4] Blackmore DK, and Newhook JC. The assessment of insensibility in sheep, calves, and pigs during slaughter. Stunning of Animals for Slaughter: 13-25. (Date: 1983)