The multinational, multibillion-dollar commercial fishing industry has been depleting fish populations around the planet for decades, driving many species toward extinction. Scientists estimate that the fishing industry kills between 0.97 and 1.97 trillion wild fish worldwide every year[1], further straining fragile oceans and other waterways that are already poisoned by pollution from oil spills, agricultural runoff and immense amounts of garbage.

Fishing has become an increasingly severe global problem because, as the human population (and its appetite for fish) rises, fish stocks continue to decline. Humanity’s per-capita consumption of fish has nearly doubled over the past half century, expanding by 3.6 percent per year since 1961—which is twice the rate of annual population growth.[2] Consumption started increasing in the 1950s when new technological developments were applied to fishing, greatly accelerating “seafood” production. These scientific advances ushered in the system of industrialized fishing that today dominates the commercial “seafood” market. For example, the innovation of sonar enabled ships to locate entire schools of fish from atop the water’s surface. Some of these vessels (called trawlers) are essentially floating factories more than 140 yards long[3] with processing plants, giant storage freezers, and other mechanical facilities aboard.[4] Other boats trail gill nets that cover several miles and catch any sea animals who venture near,[5] or longlines bristling with thousands of baited hooks that can reach up to 50 miles in length.[6]

Fish are integral to the health of aquatic ecosystems, from the smallest streams to the largest oceans, and are interlinked with one another in a complex food chain with large predators (like sharks) at the top and single-celled organisms (like plankton) at the base. However, by taking so many fish from the seas, humans have removed entire links from the aquatic food chain, upsetting the delicate balance of nature. As a result, populations of tuna, flounder, cod, halibut, swordfish, and other large predatory fish who are among the most-consumed have plummeted by 90 percent since the 1950s, causing the numbers of smaller plankton-eating fish to increase.[7]

Aquatic ecosystems in every part of the globe pay the environmental cost of commercial fishing. The following are some specific examples that illustrate fishing’s impact on different species.

Case 1: Sharks
Sharks occupy the top spot in the aquatic food chain, but they are also among the ocean’s most threatened species. One research group tracking shark populations in the northwest Atlantic found that the numbers of all the species they studied were only half what they were in the 1970s. Even worse, species like tiger, scalloped hammerhead, dusky, and bull sharks lost more than 95 percentof their numbers during the same period.[8]

Many sharks are caught by vessels searching for tuna or swordfish[9] and usually get tossed, dead or dying, back into the water. However, some fishing boats specifically hunt sharks for their fins, which are used to make shark-fin soup, a popular delicacy in Asian countries.

The dramatic disappearance of sharks has allowed traditional prey animals like rays and skates to multiply, radically altering their ecological niche. This has wreaked havoc on ocean ecosystems because as these species (particularly the cownose ray) proliferate and migrate up coastlines, they devour scallops and other shellfish at an unsustainable rate. This, in turn, can have unpredictable consequences at every level of the ecosystem.[10]

Case 2: Bycatch
Bycatch is the industry term for what they consider unwanted or economically-worthless aquatic animals who are unintentionally caught using destructively indiscriminate fishing methods like longlines and driftnets, which generally target marketable marine creatures such as tuna and swordfish. However, billions of other animals, some of them endangered, are also killed in this manner every year, including sea turtles[11], marine mammals, sharks, and sea birds.[12] Commercial fisheries’ bycatch discard is estimated to be between 17 and 39 million tons each year.[13]

Shrimp fisheries have the highest bycatch rates, with (on average) four tons of fish discarded for every ton of shrimp caught.[14] Even though the US (since 1987)[15] and some other countries have required shrimpers to install Turtle Exclusion Devices (TEDs) on their trawling nets that allow critically-endangered sea turtles to escape capture, shrimp trawling and intensive commercial fishing remain among the gravest threats to sea turtles’ survival. Worldwide, between 1990 and 2008, an estimated 8.5 million sea turtles were fatally caught in nets or on longlines as bycatch.[16]

Case 3: Caribbean coral reefs
Commonly called “the rainforests of the ocean,” coral reefs are among the most biodiversity-rich ecosystems on Earth. The corals that comprise the reefs themselves are actually tiny animals who bind together in colonies by collectively excreting a calcium carbonate skeleton for protection. The resulting coral reef creates a colorful habitat for literally millions of different aquatic species—from sponges, mollusks and crustaceans to star fish, jellyfish, sea turtles, and a wide variety of fish. However, reef ecosystems are very sensitive to chemical, temperature and population changes, so any threat to coral reefs also imperils the creatures who rely on them for survival.[17]

A major scientific study of coral reefs in 22 Caribbean nations found that many large predator species (like barracuda, Nassau groupers and sharks) have virtually vanished from these ecosystems mostly due to commercial fishing. The researchers correlated the most profoundly depleted areas with those having the densest human populations—and hence the most intensive fishing activity. Here they identified the same pattern the fishing industry follows in critical areas throughout the world: anglers target the largest fish first and, when they are gone, move on to the next largest species…and so on down the line until, in many places, only small predators remain.[18]

The disappearance of large predators from Caribbean reefs could shred the region’s delicate aquatic food web. For example, their absence has made the reefs more vulnerable to invasion by non-native species like the lionfish, which was most likely released into the wild by aquarium hobbyists. The lionfish’s spiky venomous spines give it a distinct defensive advantage over many native species, and it has a rapacious appetite for other fish. One study found that the survival rate of cardinal fish, parrot fish, damselfish, and other reef-dwelling species was cut by approximately 80 percent in areas with established lionfish populations.[19] 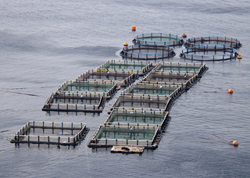 While fish farming has often been touted as a “solution” to the world’s growing hunger for fish, this production method also comes with its own environmental hazards. For one, it is incredibly wasteful, in that nearly five pounds of “trash” fish are needed to make just one pound of fishmeal for farmed fish,[20] who now consume about one-quarter of the total annual global fish catch of 20 to 30 metric tons.[21] This loss of biomass impacts species at every level of the food chain.[22]

Secondly, fish farms themselves damage the ecosystems where they are located. Farmed fish are densely packed together in pens for maximum production efficiency, but the fecal matter that accumulates in these filthy conditions can create algal blooms that deplete the water around aquaculture facilities of oxygen so that these areas can no longer support sea life.[23] Deadly parasites (such as sea lice) and viruses (like the often-fatal salmon anemia) also thrive in the putrid waters where farmed fish are forced to live, and wild fish can become infected when they swim near aquaculture enclosures. Farmed fish can also escape their pens and interact with native species, sometimes swimming several miles to their colonies. Such communicable disease threats can quickly decimate whole wild fisheries as they spread through the population.[24]

Industrialized aquaculture can have devastating consequences not only for ecosystems and animals, but for people as well. Intensive shrimp farming in Southeast Asia, for example, has destroyed so many coastal mangrove forests over the last few decades that their shores are now more vulnerable to deadly tidal waves. On December 26, 2004, just minutes after a massive underwater earthquake measuring 9.0 on the Richter scale struck the India-Burma fault line, waves as high as 100 feet deluged the Indian and Indonesian coastlines, killing an estimated 150,000 people. The tsunami would have done less damage, however, if vast areas of offshore mangrove forests hadn’t been cleared to build shrimp farms and beachfront tourist hotels, because mangroves (along with coral reefs, sand bars and sand dunes) create a natural buffer zone that prevents waves from getting so big as they approach land. Scientists studying the aftermath of the tsunami documented fewer human deaths and less property damage in areas with intact mangrove forests compared to those where they had been decimated.

The ocean covers nearly two-thirds of the Earth’s surface, and encompasses 99 percent of the living space on our planet.[25] It is home to millions of different species and trillions of individual creatures—including the phytoplankton plants that produce about half the oxygen humans and other animals breathe. The vast waters of the ocean also absorb massive amounts of carbon dioxide, which helps slow the pace of climate change.[26]

However, if humanity continues to plunder the oceans, many aquatic species that have existed for millions of years could be wiped out forever within the next few decades. In fact, with the human population expected to reach nine billion by mid-century, scientists now warn that 90 percent of all commercially-exploited fish species could become extinct by 2048 if current consumption trends continue.[27] That is why we must do all we can today to protect aquatic creatures and their oceanic home.

How You Can Help

The best and easiest way to make a difference for the ocean and its inhabitants is to refrain from eating fish or any other “seafood” and follow a vegan diet. Also share with your friends and family how commercial fishing and fish farming harm animals and the ocean, and encourage them to eat plant-based foods instead.