Affecting an estimated 50 million people in the U.S., lactose normalcy is a common form of gastrointestinal malabsorption because the digestive system no longer breaks down lactose.[1] Typically, at birth, infants have enough lactase enzymes in order to break down the lactose found in their mothers’ milk; however, over time, the lactase enzymes would be expected to decline once the child is weaned.[2] As a result of these low amounts of lactase enzymes, which break lactose down into simpler sugars that the body can absorb more easily, those who are lactose normal no longer digest significant amounts of lactose, a sugar that is also found in non-human animal milk and milk products.[3]  For those adults who can digest lactose the implications of these biological processes might be hard to grasp, but the discomforts caused by the body naturally rejecting lactose are very immediate and must be dealt with by removing lactose from the person’s diet.

A doctor is needed to diagnose those who are lactose normal because the symptoms often appear outwardly similar to those of other gastrointestinal discomforts as well as milk allergies, which are related to the proteins rather than the lactose in milk. Discomfort usually begins about 30 minutes to two hours after milk or milk product consumption.[3] As the lactose moves through the digestive tract without being broken down, it reaches the small intestine, where it becomes thick and combines with bacteria from the colon to produce excessive hydrogen gas.[1]

Resulting symptoms include aching abdominal pain, nausea, uncomfortable bloating, crippling cramping, diarrhea, flatulence, and borborygmi (stomach growling).[1] The severity of these manifestations depends on how much lactase remains in an individual’s body as well as how much lactose is consumed in one sitting.[3] While the symptoms of being lactose normal are rarely dangerous, they are undeniably unpleasant and can often interfere with the daily routines of a person’s life.

After examining the demographic statistics for those who are lactose normal, many medical experts have suggested that the condition has a genetic basis, as it is prevalent primarily in black and brown communities.[4] While the total amount of lactase in the body is high at birth for the majority of infants, regardless of ethnicity, this amount drops dramatically around ages five to seven in non-Caucasians and other groups of people who do not have a traditionally dairy-heavy diet.[4]

While 95% of Asians, 60-80% of African Americans and Ashkenazi Jews, 80-100% of American Indians, and 50-80% of Latinx are lactose normal, only a very small proportion of individuals of northern European descent experience any pain as a result of consuming lactose-filled milk products.[4]

There is good news for those who are lactose normal: almost three-quarters of lactose normal people will do well on a lactose-free or lactose-restricted diet.[1]

The bad news is that the communities that are most affected, namely black and brown communities are often extremely limited by a lack of dairy alternatives offered where they live. Food Empowerment Project studies documented access to healthy foods, including meat and dairy alternatives, in both high-income and low-income neighborhoods in Santa Clara County, California, and in Vallejo, California. The resulting reports, titled Shining a Light on the Valley of Heart’s Delight: Taking a Look at Access to Healthy Foods in Santa Clara County’s Communities of Color and Low-Income Communities (PDF), and Vallejo: City of Opportunity Lacks Access to Healthy Food (PDF), found that dairy alternatives in lower-income areas, which have proportionally much larger populations of ethnic minorities, were not as accessible compared to availability in higher-income neighborhoods.[5][6] In Santa Clara County, dairy alternatives were available at 23% of locations in higher-income neighborhoods compared to being available in only approximately 3% of market locations in low-income areas.[5]

Because of the absence of dairy alternatives in lower-income areas, many individuals who are lactose normal may not even be aware of the myriad products on the market that offer solutions to their painful and persistent dietary discomforts. Food Empowerment Project offers a detailed guide to vegan foods, all of which, as the name suggests, are vegan and therefore free of dairy and the troublesome lactose as well. For almost any dairy food imaginable, including butter, cheese, yogurt, and ice cream, there is a vegan alternative.

While Food Empowerment Project recognizes there can never be one solution to a problem as complex as food injustice, for any solution to work, policymakers, corporations, and communities need to work together. Communities that have many residents who are lactose normal need to speak up and let it be known that they need dairy alternatives to make their lives easier and less painful, while the policymakers and corporations need to be ready to listen and effect change. 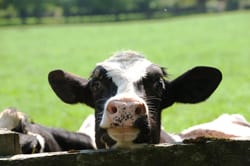 In addition to being lactose normal, there are plenty of other reasons everyone should have access to non-dairy foods. As the public is becoming more aware of the cruelties inflicted upon cows raised for milk and other farmed animals, as well as the dreadful environmental impact of factory farming, there are more and more people making the choice not to drink milk or consume dairy products.

Choosing to follow a vegan diet is not only better for your health but has immediate, positive impacts for the animals and the environment.

[5] “Shining a Light on the Valley of Heart’s Delight: Taking a Look at Access to Healthy Foods in Santa Clara County’s Communities of Color and Low-Income Communities.” Food Empowerment Project.  https://foodispower.org/documents/FEP_Report_web_final.pdf  (9/15/10)