Fast food in the U.S. has grown from a $6-billion-a-year industry in 1970[1] into a corporate juggernaut with a reported $200 billion in annual revenues in 2015.[2] Especially because “meat,” dairy, and eggs are the main ingredients in fast food, the exponential increase in its consumption has engendered a wide range of negative social impacts—including rapidly rising rates of diet-related disease, worker exploitation, systemic animal abuse, and environmental degradation. 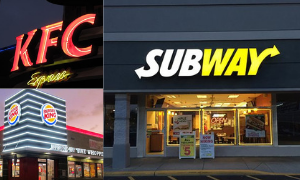 The fast-food industry’s economic clout has not only enabled it to effect a radical shift in the country’s eating patterns (as well as those around the globe), but it has also fundamentally altered the very way that food is produced. The industry’s enormous purchasing power and demand for vast amounts of cheap animal products are among the principal driving forces behind factory farming, as well as the massive government subsidies for staple animal feed crops like corn and soy that sustain it.[3] As a result of the industry’s excessive economic influence, gigantic multinational corporations like McDonald’s, Burger King, and KFC make huge profits selling fast food at artificially reduced prices.

Meanwhile, obscured behind the veneer of fast-food companies’ slick multi-billion-dollar marketing campaigns are the true costs to public health, fast-food workers, animal welfare, and the environment.

It’s not difficult to find peer-reviewed scientific studies that conclusively correlate the consumption of “meat” and other animal products with many of the deadliest medical disorders plaguing humankind today, including cardiovascular disease, cancer, and diabetes. A Washington Post article noted that a review of studies on fast food and heart health linked eating fast food more than twice a week to “a higher risk of metabolic syndrome, type 2 diabetes and death from coronary disease,” while adding that, “…nearly half of American * adults eat fast food at least once a week.”[4]

Unfortunately, it also appears that children in the U.S. are eating more fast food. A 2016 survey by researchers at the University of Connecticut reported that there was a 12 percent increase in parents buying their children fast-food meals compared with a past survey done in 2010, and even though fast-food chains have been offering healthier options, most kids are still eating the unhealthy sides and drinks.[5] Jennifer Harris, an associate professor in allied health sciences at the University of Connecticut, noted that “… fast food advertising has gone up during that time by pretty large amounts.”[6] A 2015 study in the Journal of Pediatrics found that “… fast-food commercials featuring toy giveaways led children to ask their parents to take them to the restaurants. And the more the children saw the fast-food commercials, the more frequently they ate fast food.”[7] Even more concerning is the issue of digital advertising, such as social media. A World Health Organization’s comprehensive report found that “Digital marketing of unhealthy foods to children poses a unique risk. Marketers can tailor ads to those most likely to buy the products, taking advantage of children’s vulnerability online …”[8]

In 2012, fast-food companies collectively spent $4.6 billion on advertising,[9] and with that kind of money, these companies can easily target the most vulnerable. A study by researchers from the University of Illinois at Chicago and Arizona State University found that fast-food chains are marketing to low-income black children who have an increased likelihood of being unhealthy.[10] A January 2019 report by the UConn Rudd Center supports these findings, noting that “Food-related companies almost exclusively target advertising for nutritionally poor products to Hispanic and Black consumers, and Hispanic and Black children and teens view large numbers of these ads. The most highly targeted categories – fast-food, candy, sugary drinks, and snacks – consist of products that are high in sugar, fat, sodium, and calories; represent the majority of empty calories in young peoples’ diets; and directly contribute to diet-related diseases … These same diseases disproportionately affect communities of color.”[11] This is unfortunately not a new revelation, as a 2007 article in the California Law Review noted that “The overabundance of fast food and lack of access to healthier foods … have increased African American and Latino communities’ vulnerability to food-related death and disease. Structural perpetuation of this race- and class-based health crisis constitutes ‘food oppression.’”[12]

Fast Food in Black and Brown Communities and Low-Income Areas

A pattern of fast food concentration is generally found throughout black and brown communities and low-income areas where fewer supermarkets are located. According to a Policy Link report, a nationwide study found that low-income ZIP codes have 25 percent fewer chain supermarkets than middle-income ZIP codes, and compared to predominantly white ZIP codes, majority African American ZIP codes contain about half the number of supermarkets, while mostly Latino ZIP codes have about a third as many. [13] A more recent report by Policy Link from 2013 confirms that “Many of the communities that lack healthy food retailers are also oversaturated with fast-food restaurants, liquor stores, and other sources of inexpensive, processed food with little to no nutritional value.” [14]

This information coincides with the results seen in Food Empowerment Project’s report, “Shining a Light on the Valley of Heart’s Delight.” The high density of fast-food outlets, as well as liquor and convenience stores in neighborhoods selling cheap, high-calorie foods, often crowds out supermarkets, grocery stores, and farmer’s markets that offer healthy (but often more expensive) dietary options.[15] Similar results can also been seen in Food Empowerment Project’s report “Vallejo: City of Opportunity Lacks Access to Healthy Food,” where “Eighty-eight percent of all liquor stores and 71 percent of all convenience stores in the city of Vallejo are in low-income neighborhoods.”

Blacks, Latinx, and other people of color most likely to live in areas which lack access to healthy foods suffer disproportionately from higher rates of diet-related disorders than whites—and fast food is one of the main causes of this deadly disparity. Residents of these areas typically have a plethora of fast-food restaurants to choose from within walking distance of their homes, but the nearest supermarket or grocery store may be miles away. Also, many low-income individuals do not have access to private transportation and must work two jobs just to make ends meet. Feeding their families fast food is therefore usually quicker, easier, and less expensive than shopping for and preparing home-cooked meals; however, reliance on fast food as a dietary staple (especially over long periods of time) causes poor health from inadequate nutrition.[16]

Started in 1948 by two brothers, McDonald’s is arguably the most well-known fast-food retailer and a prime example of the spread of Western-style fast-food chains to global markets. In 2018, it was the second largest fast-food retailer behind Subway with the top global market value of $126 billion [17] and can be found in 120 countries with more than 37,000 outlets worldwide.[18]

Between 2011 and 2016, fast-food sales grew by 21.5 percent in the U.S., while worldwide sales surged by 30 percent.[19] For many emerging markets, Western-style fast food isn’t just about food; it’s about social status. [20] “People march their sons and daughters to buy KFC and buy pizza and they like to show them what we can afford,” University of Ghana lecturer Matilda Laar told The New York Times in 2017. [21]

Fast Food Impacts on Workers, Animals, and the Environment

In addition to harming human health, the fast-food industry also has detrimental impacts on:

It is clear fast-food corporations don’t care about anyone—not the workers, not the animals, not the environment, and of course not people’s health. It’s all about making a profit. We would like to tell people not to buy from these fast food giants, but we know that might not always be possible. When there is no choice, it is still possible to make a difference by purchasing a vegan option.

*This article only refers to the United States, as “America” would include all of the Americas.